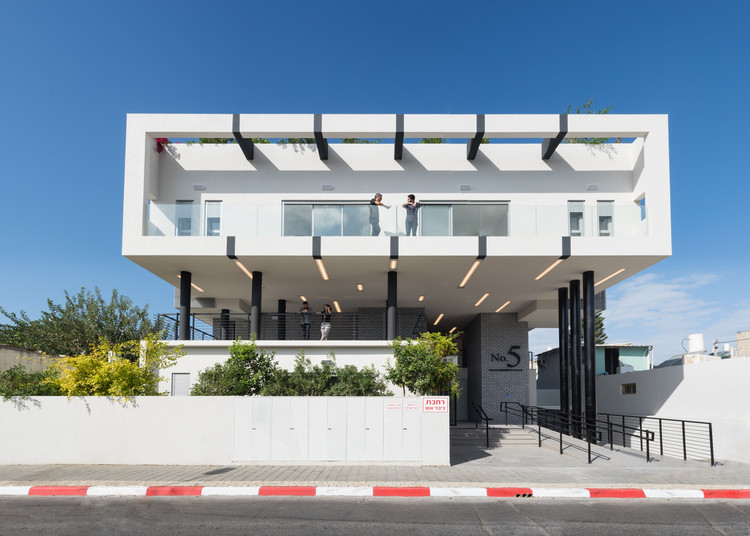 Text description provided by the architects. In this review we wish to present as an argument and the unique way of our architectural planning as well as the final product, the built structure.

The building in the main Ba'al Haakeda 5, located in one of the southern neighborhoods of Tel Aviv. This is neighborhood composed of a heterogeneous population, from foreign immigrants, veteran families, students and young families who have moved in recent years. The neighborhood is characterized by small buildings and is rebuilt at a rapid pace. This 4 story residential building has a 1,500 m2 in total, with 10 apartments units with 3-5 rooms, a wide open public terrace.

Our work is presented as a product of Architecture-Philosophy research through the architectural medium, by a unique planning methodology that enables to deal with shapes and spaces separately from their formal and cultural meanings.

Form Has No Meaning
Reading poetry reveals a unique and exciting perspective on the world, a story or a book describes it in more detail. Similarly, does it for the two-dimensional painting, and the three-dimensional sculpture. Architecture in turn could be the medium to research through the use of space, an opportunity to learn about the world.

The architectural work presented here was not designed as a criterion of Form as "beauty" or its compositional quality. The basic assumption that stands before our eyes is that "Form Has no Meaning". We, as architects, deal with the creation of formal spaces for the human use and culture. However, the full understanding of the forms as symbols of cultural significance is far from our ability as creators, and is immeasurably complex for the urban and cultural complex in which it exists. In order not to get carried away into infinite interpretation, we seek to dichotome "Meaning" an "Form" as a symbol. Through out this structure, we want  to present a methodology, in which architectural can reveals layers about the object of the discussion in which the architectural is deigns and planed.

M.O.F. Methodology
In each architectural structure, the uniqueness can be found in the triangular encounter between the physical plot, the entrepreneurial program and the creative / investigating architectural action. In order to process the uniqueness in a minimum of symbolic forms, and to justify the creation of formal pure spaces in architecture, we propose a unique methodology ​​called M.O.F., Meaning-Order-Form. In this way, our architectural work processes the form spaces that follow the Order rather than the Meaning. The use of Order as a barrier and a bridge between Meaning and Form.

This distinction was made after the analysis of the building rights and the program that we received from the owners. We discover that the volume of the "envelope" was significantly greater than the requested building rights. As a result we created a public space in the ground floor, a small mezzanine and a large floor, which we stayed "in the air". In fact, we could attach the "useless" spaces to almost every place in the building, this decisions made through the use of M.O.F methodology.

The uniqueness which we found in this plot created the subject that was discourse in this architecture building. The subject is the concept of "Colloid" in the architectural action made. It is important to clarify that this is not methodological for empirical research or an attempt at empirical discussion, but to expose an additional layer to reality through the gaze of the architectural action that exists in every plot and in any unique  architectural work. In the case of pure building, has a criticism and discussion of the "Colloid" concept using the M.O.F methodology.

Meaning
"Colloid": A concept that describes a homogeneous (uniform) mixture between two substances. Consists of tiny particles of a single substance ("scattered phase") that are uniformly distributed in another material whose particles surround the first particles of matter ("continuous phase"). In reference this  is the distinction between two distinct bodies and a space that stabilizes them within a wider space. The subject raised is about the stabilizing one space in the public space between the two bodies, and its projection from the street to the private building.

Order
Two formal rules: (1) Create a spatial mix between "existent" layers,  and " non existent" layered construction open spaces at various public levels. (2) creating a range in the public sphere.
Form
In fact, dozens of form sketchs have been made that comply with the Order rules. We refer to sketches and a video in which forms of the preferred option.

We reached several conclusions. The first is that the " non existent" component unites and stabilizes the private spaces of the "existent". This component is found in several formal levels, and in a wide range of public structures in the street. The main component of this building resonates in the public space and creates the structure by subtraction on the ground floor, and connecting to his urban surrounding. A structural division that preserves the first floor in the neighborhood scale. The decision to place the ground floor in relation to adjacent buildings of the same height. The movement of this element takes place from the open entrance to the street and to the technical spaces, continues to the public space on the mezzanine floor, and ends in the public space marked by the framed and monumental porch facing the street.

Much of the architectural work done in the building was to highlight architectural conclusions in the discussion about "Colloid". For example, the decision to place three thin pillars at the entrance was made to emphasize the street and the entrance hall, and together with the split floor. As well as the choice of covering the public space walls in the same toning colors and materials as in the street. Another example is placing only one apartment in the rear of mezzanine floor, and choosing the horizontal railings there, compared with the glass in the upper balcony, to do a distinction of public spaces. It should be noted that there are many other decisions at different levels (lighting, openings and frames) that are made throughout the planning and Construction, but it is not possible to list them al here.

In conclusion, the description of the architecture planning process emphasized the unique way in which the building was created, one that presents our experience as architects who can also research the world. This is a bold step that present methodology through which one can "Think the unthinkable" (Deleuze & Guattari, A thousand plateaus).