Save
The Chemistry of Kahlo Blue
Share
Or
Copy 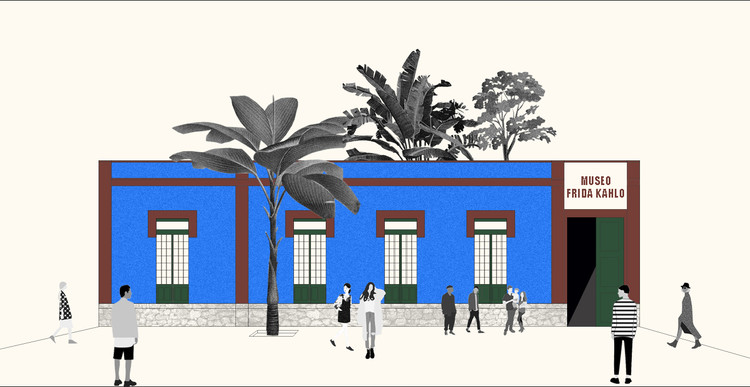 The Frida Kahlo Museum, better known as “Casa Azul” (Blue House), is located in the center of Mexico City's Coyoacán district. The house was acquired by the Kahlo’s in 1905 when the then white structure was an example of constructive colonial typology: a central courtyard surrounded by rooms that limit in continuous facade with the street.

Fortunately, the composition of that building underwent changes. Frida would use her childhood home, after getting married, as a residence and art studio, making modifications and expansions to the original project. Of the changes, in my opinion, the most important and work of art in itself was to paint the house an intense blue.

The properties of the house were changed forever for two reasons: the first is the cultural symbiosis that occurs between colonial architecture and the native peoples of Mexico through the use of color. The second is the experience of inhabiting the house as a visitor.

Mexican poet Carlos Pellicer describes it as, "the house, painted blue inside and out, seems to lodge a bit of heaven."

Similar to a spiritual sky, the Blue House, evokes the sensation of transcendence. When crossing the entrance portal, the atmospheric conditions change, and one emerges into another climate. The foliage in the garden, cultivated with species selected by Frida (maguey, nopales, and yuccas, among others), and the design shadows on the flat blue walls generate a microenvironment of filtered light that is humid and rustic.

The reddish floors contrast the organic spontaneity, with the disposition of pre-Hispanic archaeological pieces, lodged mainly in the pyramid of three levels, located in the last extension of the patio.

More than an edifice for the pictorial works of Frida Kahlo, the Blue House is a reactive agent; in the creative process of its owner, and now, in the trajectory of its visitors.
The visit to the Frida Kahlo Museum was made possible thanks to the coordination of CDMX World Design Capital 2018.