This article was originally published by Metropolis Magazine as "These Architects Sought to Solve the Ultimate Human Design Flaw—Death."

Arakawa and Gins completed five projects in their lifetimes—three in Japan, two in America—and to call them unconventional is a gross understatement. There’s an acid trip of a park; an eye-poppingly colorful, plucked-from-Pixar apartment building; and doorless lofts with bumpy, uneven flooring. Rather than whimsy or quirkiness, their ethos—dubbed Reversible Destiny—aimed to seriously promote longevity by activating and stimulating the body and mind. 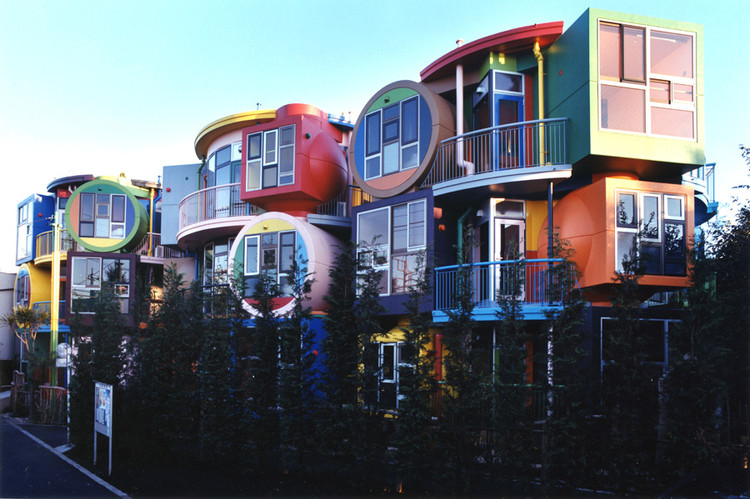 “They thought about death as a process, which the body is constantly trying to fight against,” says ST Luk, project manager at Arakawa and Gins’s New York-based Reversible Destiny Foundation. “Our bodies are conditioned by our surrounding environments and our architecture, and we naturally adapt to whatever space we are given. Once you feel comfortable, your body begins to deteriorate. The architecture basically tries to keep you from fully adapting to it.”

Arakawa and Gins are decidedly not household names. They belong to no school, their time as builders is only one part of an unfairly neglected 50-year artistic career, and their work exists outside the traditional canon. In other words, architecture students rarely encounter them. There’s some irony, then, that the Columbia University Graduate School of School of Architecture, Planning and Preservation (GSAPP) would provide a long overdue reintroduction.

Arakawa and Madeline Gins: Eternal Gradient is a compact, refreshing, and stimulating show on view at Columbia’s Arthur Ross Architecture Gallery through June 16. Roughly spanning 1983 through 1991, it tracks Arakawa and Gins’s move from the visual arts to architecture through previously unseen illustrations, large-scale paintings/design plans, and text pieces. Taken together, it forms a potent record of a high-wire artistic act.

“I think it’s interesting to get architecture in dialogue with another field that it isn’t normally in dialogue with,” says curator Irene Sunwoo, who also directs exhibitions at GSAPP. “When was the last time you heard about a poet working in architecture with a painter?”

Arakawa was already an established conceptual artist in Japan when he decamped for New York in 1961. Two years later, he met Gins, a native New Yorker five years his junior, at the Brooklyn Museum Art School. Her medium was text—experimental poetry and, later, books like WORD RAIN: Or, a Discursive Introduction to the Philosophical Investigation of G,R,E,T,A, G,A,R,B,O, It Says (1969) that challenged readers’ concepts and ideas of language and form. They soon married and became inseparable collaborators.

Almost from the start, their work was physical and spatial. Their seminal The Mechanism of Meaning, begun in 1963 and iterated upon numerous times over the decades, pointed toward the concepts, practices, and philosophies that would define their practice. Originally created with 80 panels, each measuring 90 x 66 inches, the piece moves viewers through different experiences via text and mixed-media art, forcing an intellectual and sensory encounter with words, objects, and philosophical questions.

Arakawa and Gins followed that monumental piece with two decades of architecturally inflected art, from Sculpting II (1971), a “floor plan of speech,” to the spatial-textual rendering-like Waiting Voice(1976). Arakawa also began constructing physical experiences for gallery installations: ramps viewers had to walk or pull themselves onto to view paintings, images printed on floors, a moving walkway.

“As an artist, we’d say these were architectural in scale,” says Stephen Hepworth, director of collections at the Reversible Destiny Foundation. “In a sense, we can talk about Arakawa kind of always pushing towards the body within a built or experienced space.”

Eventually, that led to architecture directly. Eternal Gradient locates 1983 as the flashpoint, when Arakawa and Gins are tapped to develop a project on the Venetian lagoon island Madonna del Monte. If built, Container for Mind-Blank-Body would have been an epic, multi-stage experience that deployed fabricated material like wire meshing alongside natural formations to stimulate self-reflection and self-discovery. Nevertheless, conceptualizing the physical and psychological experiences for the island proved pivotal.

From 1985 to 1987, Arakawa drew 24 Screen-Valves, vertical containers resembling dense mesh pods (displayed for the first time at Columbia) that interrogate architectural space. The artists believed the material and spatial potential of the screen-valve could eventually replace walls, floors, doors, even bodies—a concept that led directly to another work, The Process in Question/Bridge of Reversible Destiny. Conceived in 1987, the bridge was to span a river in Epinal, France, and include containers of unfamiliar landscapes “designed to trigger uncharted perceptual and bodily responses,” Sunwoo writes. A 42-foot-long model was exhibited in New York in 1990 and a far smaller model is included in Eternal Gradient. The full-scale bridge was never built.

Still, the experience led to a permanent shift to architecture. Gins published her third book, Helen Keller or Arakawa, in 1994, but Arakawa’s attention was fully on building things. “He buried a very substantial art career by just not bothering with it any longer, which is why we haven’t heard of him,” Hepworth says.

Luk adds, “I just think that because they were always moving forward they felt like they had moved ahead.”

Arakawa and Gins finally realized a project in 1994. Ubiquitous Site * Nagi’s Ryoanji * Architectural Body was completed at the Nagi Museum of Contemporary Art in Okayama, Japan, and the experience would make Lewis Carroll proud. Upon entering the site from a dark staircase, visitors emerge inside a light-filled, physics-bending inclined tube where the grounded bench and seesaw are mirrored on the ceiling and the walls are replicas of Japan’s Temple of Ryoanji’s historic rock garden.

“None of the projects came out the way they fully envisioned them,” Luk says. “But at least Madeline used to say that Nagi was 90 percent.”

Still, the residential projects are the fullest realization of their reversible destiny ethos. The uneven floors resemble a nubby, prairie-dog-infested plain; ceilings are low where they should be high; entrances are in strange places, like under the kitchen; and common amenities, like doors to the bathroom, are missing.

Even if the literal-minded snickered, and they did, Arakawa and Gins stated repeatedly that these architectural features promoted “death resistance” by demanding an unusual, uncomfortable interaction with the space. By design, you have to think—hard—about how you engage with the spaces.

“Most times when you see the term ‘reversible destiny’ it’s equated with eternal life, which I don’t think is what they were getting at,” Sunwoo says. “To me, it’s more of a prompt to understand how to live to your fullest, to understand all of your body’s capacities, how it interacts with the world on every single level: through your senses, through your mind and how your mind can construct the world around you. And in doing so, one is able to experience life so much more exponentially than we can ever understand.”

The couple left numerous grandiose plans—“Isle of Reversible Destiny,” a city in Tokyo Bay; “The Reversible Destiny Healing Fun House”—when they died: Arakawa in 2010 at 73, Gins in 2014 at 72. But even if they couldn’t extend their lives, their work is proving resilient. Besides Eternal Gradient, models and drawings are included in the touring show Shonky: The Aesthetics of Awkwardness and The Future Starts Here, which opened this month at London’s Victoria & Albert Museum. The Reversible Destiny Foundation is also working with Gagosian gallery, which represents Gins’s estate, on an exhibition and publication due next spring.

All that represents a boom for Arakawa and Gins, conceptual artists, and untraditional architects who defy easy categorization. But in this Instagram era, the world might have finally caught up with their visually evocative work—be it a page of text, a drawing on drafting paper, or wild loft spaces.

“There’s this one phrase that one of their colleagues told me they would say over and over again, and it’s ‘Choose everything,’” Sunwoo says. “That’s amazing, just having that freedom not to be tied to your professional identity and just contaminate your thinking always.”