For their first major project in Australia, international design firm Broadway Malyan has been selected by the developers behind Greater Springfield, the continent’s largest master-planned community, to design a new health-focused district around the site of Mater Private Hospital Springfield outside Brisbane. Already a healthcare hub containing the hospital, Aveo Springfield Retirement Village and a hotel, the proposed development would expand the so-called “health city” to include a hospital expansion, medical offices, residential and retail space, as well as facilities for wellness, education, research, hospitality, aged care, and start-up businesses.

Built ideologically on Greater Springfield’s core tenets of health, education and information technology, Springfield Central Health City will be designed to promote wellness by providing opportunities for movement, incorporating natural elements for sustainability and fostering connections between the separate groups that will use the space. “To deliver the future models of healthcare that we aspire to, we have placed significant importance on connectivity and a master plan that will encourage collaboration at all levels,” said Maha Sinnathamby, Chairman of the Springfield City Group, “from the medical staff, researchers and students, through to entrepreneurs, tourists and residents of all ages.” The project will eventually include housing for over 2,500 seniors in apartment-style living, expanding the population of Greater Springfield which already numbers over 40,000.

After a decade of work in the Asia Pacific region, Broadway Malyan worked with local partner Conrad Gargett to secure the commission through an international competition. The 52-hectare development on the southern edge of Brisbane is predicted to be built by 2030. 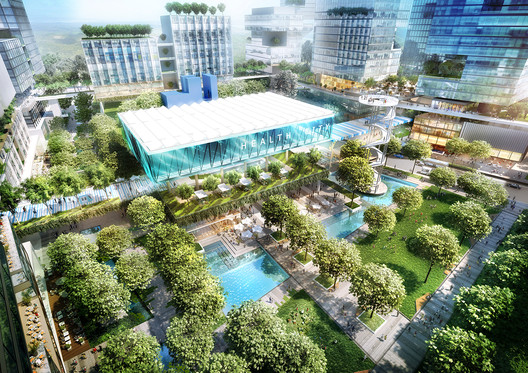