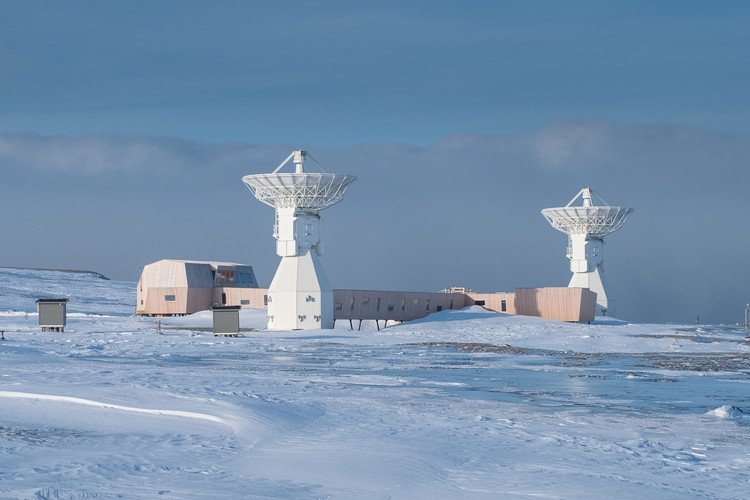 Text description provided by the architects. Ny-Ålesund is a research town on the island of West Spitsbergen of Norwegian archipelago Svalbard. This is the northernmost settlement on Earth with a permanent population of 30-35 people, which increases in the summer to 120. Ny-Ålesund was founded as a settlement of coal miners in 1917, but in the 1960s coal mining was discontinued and the town was converted into a research settlement. Currently, there are 16 research stations run by scientists from 10 countries. A new earth observation station established by the Norwegian Mapping Authority (Kartverket) and developing by NASA will be the seventeenth in this list.

The observatory is the latest addition to a global network of space geodetic stations and satellite-based infrastructure (GNSS). The Arctic station will make high-precision time measurements, help track changes in the ice sheets, improve the efficiency of marine transportation and agriculture, measure changes in the local gravity range and accurate distance to orbiting satellites. The main tool, which should accomplish all of the above, will be a new state-of-the-art satellite laser provided by NASA. Design a shell for such a high-tech filling was entrusted to the Svalbard office of LPO arkitekter.

The Earth Observatory consists of five main elements - Station building, two VLBI (Very Long Baseline Interferometry) antennas, SLR (Satelite Laser Ranging) building and Gravimeter building. The station, antennas and SRL building are connected by a built-in walkway and represent a cross in plan oriented to the north-east. Gravimeter building is located separately. The cross-shaped form looks very iconic, however, like the orientation of the building, it is not due to aesthetic considerations, but to the snowdrift analysis.

“We performed a CFD (Computational Fluid Dynamics) analysis, and tuned the shape and height above the ground to make sure the entrance would not be blocked by snow deposit” - told Øystein Kaul Kartvedt, who was responsible for this part of work. The buildings are secured by piling to the underlying rock. To preserve wildlife and avoid melting the ground permafrost, the buildings are raised a meter above the ground. The entrance faces southwest to avoid disturbing the vulnerable animal life in the area. The wind primarily blows from southeast, so the buildings are designed to avoid snowdrifts in front of the entrance. All buildings are asymmetric with different angles of facade slope, which improves aerodynamic properties.

The station building is the "heart" of the observatory. The building contains all necessary facilities for operation. On the ground floor, there are garage and workshop, storage room, freshwater, and septic tank rooms. All rooms have direct access from the outside. On the second floor, the observation department with the control room is centrally located. From here, operators have a clear view of the two VLBI antennas and visual contact into the computer room next door. There is also allocated space for break area with mini kitchen. The plant is not scheduled for 24 hours continuous operation, however, accommodation, with a bedroom and bathroom, is suitable for emergency situations or for special needs.

The SLR building is reached from Station building via a footbridge. The building consists of an operating room with storage and a laser room. In the laser room, NASA’s new state-of-the-art satellite laser is put on a separate foundation on the rock, free from the structure of the building. Over the laser, a dome strong enough to open and break the ice that might accumulate on top during Svalbard's frigid winters is mounted on the roof.

The Gravimeter building is located at the north end of the Observatory site. Access is via stairs from outside into a porch. From the porch, you must have visual contact into the gravimeter space through a large glass. There are three separate foundations for the gravimeter instruments. The foundations should be independent of the structure of the building. The footbridge is built to shield nature and wildlife against human activity. The footbridge connects the Station, the SLR building, and two VLBI antennas, and should be used as the lead path for cables from the aerials to the Station building. The cable race should have a stable temperature corresponding to the temperature in the adjacent room.

From the footbridge, there should be direct access to the VLBI antennas. Windows on the facades of the built-in walkway from the Station to SLR building form a meander ornament, probably the only moment in this project that is more decorative than functional. The observatory is fulfilling strict Norwegian standards for low-energy buildings. All the loadbearing elements are cross-laminated timber, insulated on the outside and clad with untreated spruce paneling on walls and roofs. The buildings will turn grey with time and blend into the surrounding landscape. Despite the fact that the main construction work was completed at the end of 2015, the observatory is to open in June 2018. All the systems should work by 2022. 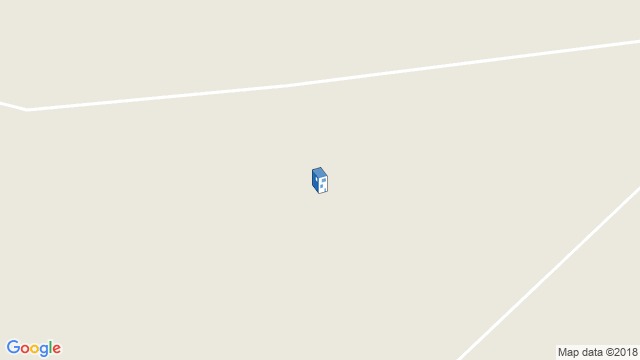