Even after the death of John Portman & Associates’ namesake architect in January, the firm continues his legacy of innovative and elegant hotel architecture. On Monday, the Atlanta and Shanghai-based firm announced that they had been selected to design a new hotel and residential tower in Xi Shui, China. Portman & Associates’ design, dubbed “Greenland Wuxi 200,” beat out international entries to a design competition hosted by the hotel developer Greenland Hong Kong Wuxi.

The winning design features three stacked cubes, one for each of the buildings’ functions: hotel, long-term stay, and sky villas. With each cube separated by garden terraces, the three functions are readable in the facade. Gradient opacity further differentiates the building’s functionality. According to Portman & Associates, “at the lowest hotel floors, the facade expression is more solid, providing privacy from within” while “the long-term rooms are slightly more open, and the sky villas are completely glazed floor-to-ceiling, affording fabulous views to the city of Wuxi, to the Mountain Hui, and up and down the bordering ancient canal.”

A horizontally elongated podium compliments the tower in a similar manner to that of Skidmore, Owings, and Merrill’s mid-century Lever House in Manhattan. Portman & Associates cite the four-story podium as critical to activating retail along the building’s base. Their scheme even proposes that “the retail street be transformed to a pedestrian street without a road connection through it.” 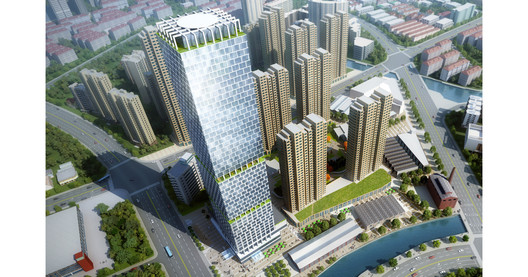