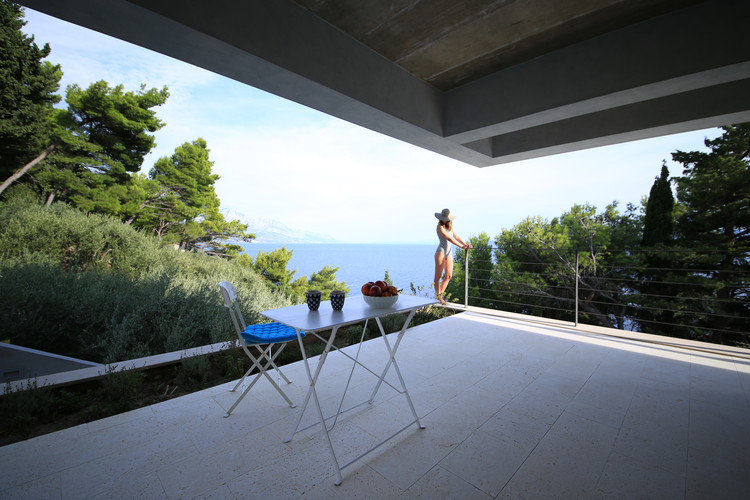 Text description provided by the architects. How should a vacation home look like, on a rather steep terrain that collapses into the sea so that all vegetation, combed by the bora, looks distorted and schizophrenic. Vacation homes in the era of socialism were called "cottages". They were prestige things for every socialist bureaucrat. Socialism collapsed, but the spirit of "cottage" with its incompleteness and clumsiness remained circling above the coast of the Adriatic Sea. Having learned from bad experiences of not so distant history, I wonder what those structures should be? Such buildings remind me primarily of a porch, deep shade, shadow, a view of the sea horizon.

In the spatial concept and scenario of use, the key role is played by the relations between geometrically elementary "full" and "empty" volumes. Outdoor spaces—rooms in the open, are integrated in the scenario of using and experiencing the house.

Already the Romans used the vine as a covered structure that creates a shadow. It is called pergola. This ingenious invention that creates shade and gives fruit in summer, and passes the sun's rays in winter, was the starting point of my thinking about country architecture. I wondered why a pergola would not be a "housing-sleeping cube", and a kitchen a cube cut into the hill. By moving these two cubes we get a large, covered living room, that is, a terrace. The third cube is cut deep below the living room—the terrace, and is reserved for guest rooms. The house is formed by the interplay of three almost identical cubes. A "positive void space" is created that lets the flow of the mountain wind pass toward the sea, that does not block the view of Brač and Biokovo. It is painted with shade and is horizontal enough to carry on it all the needs of dwelling.

The microclimate conditions and a view determined the layout of the building. But the same applies to the materiality and tactile properties of the house. The cubes are cast from concrete, and relate to the rocks of Biokovo mountain range with their color. Traditional construction of small rural houses in this area implies the construction from a single material. It was mostly stone, and the cover was made of stone slabs. That anonymous gesture created beautiful functional units and, as required, open spaces. Dalmatian architecture is the architecture of open spaces—uncovered or covered with vine, stone slabs, tile, or, in this case, a concrete cube.

I have been carrying the idea of this house for seven years. They say that we are builders of ideas. Miraculous is the path from the idea to realization. I never wanted to create an image from this house, to create a sculpture. To direct a space for living. The space must be filled with us. I wanted to make a proper protection from the sun, protection from the wind, rain, and cold, I wanted all windows and openings to be full of the sea.