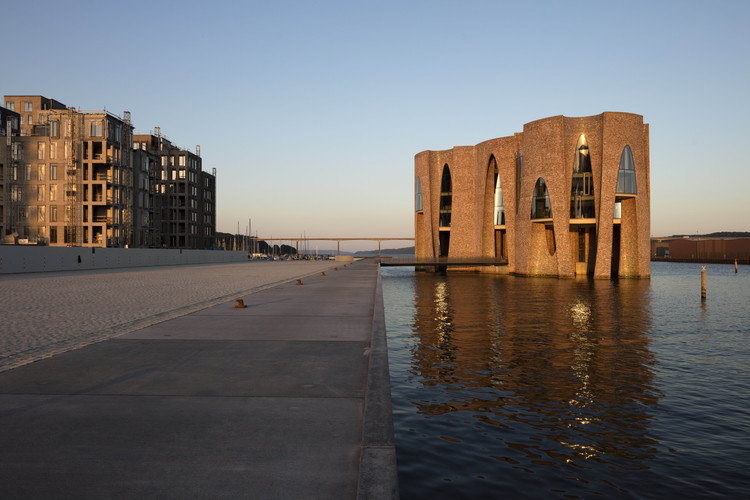 Setting. Vejle Fjord in Jutland stretches east from its head at the city of Vejle to its mouth at the Kattegat Sea. Fjordenhus stands in the water alongside Havneøen (The Harbour Island), a man-made island that was developed in response to a concept by Vejle Municipality to revitalize the harbour area, introducing important new residential components into a traditionally industrial environment. For those approaching from Vejle’s main urban axis, the building appears as the focal point, surrounded by water and with the Vejle Fjord Bridge in the background. The concrete and cobble-stone surfaces of the expansive plaza in front of the building are echoed in the design of Günther Vogt’s jetty, while the cylindrical forms and distinctive brickwork of Fjordenhus nod to the historical harbor typologies of warehouses and silos. Set against the backdrop of the fjord, the building itself breaks the smooth plane of the water.

Building. Accessible by footbridge, the twenty-eight-meter-high building is formed by four intersecting cylinders with brick facades from which ellipsoidal negative spaces were removed to create complex curved forms and arched windows. The varying floor plans of the different levels are organized around circles and ellipses, with specially designed furniture and lights, and are connected by spiral staircases and round vestibules. The double-height ground floor, which is open to the public, is permeated by the fjord and contains two aqueous zones with site-specific artworks by Olafur Eliasson. The KIRK KAPITAL offices occupy the upper three floors. Perched atop the building is a green roof with vegetation and solar panels. By night, Fjordenhus is lit from within, resembling a lighthouse.

Bricks. Classic Danish brick is the predominant material of the building’s inner and outer walls. The brick forms the smallest possible building unit and follows the organic shape of the building. Fjorden's- hu's intricate brickwork shapes visitors’ impression of the building as they approach. From afar, the building’s surface seems orderly, but upon closer inspection, the different shapes and slightly irregular staggering of the bricks’ depth reveal a lively, organic surface. The brickwork incorporates fifteen different tones of unglazed brick; additional colors of glazed bricks are integrated into the carved-out sections to produce color fades – green from the bottom and blue from the top – that reflect the water and sky. In the stairwell, scattered silver bricks reflect the sunlight shining in from above. The bricks function not only aesthetically, but also technically: hollow ventilation bricks are placed throughout the walls to modulate both sound and temperature. Every corner, niche, and arc required an individual brick-laying solution; each brick was especially t into the complex curvature of the concrete walls, the overall brickwork lying flush with the curved steel frames and glass elements of the facade.

Floors & Ceilings. The floors and ceilings of Fjordenhus are formed by white concrete slabs, creating spaces 3.2 meters in height on each level. They conceal the distribution of technical infrastructures such as heating and cooling systems. The grid pattern of cut-out negative circular volumes in the ceiling reduces the overall weight of the ceiling. These hollows also serve to hold light fixtures and modulate the acoustics of the space. Pietra Piasentina stone was used to cover all the floors. Unlike classic granite stones, Pietra Piasentina can only be found in boulders quarried from the hills of Friuli, Italy.

Windows & Doors. The double-curved, 3D-formed windows precisely follow the geometry of Fjordenhus. Steel frames span several floors of the building, while the window voids form the main element of the facade. In some areas, rotating doors were introduced to accommodate the geometrical challenges of the building’s overall shape. All of the doors and windows are tilted; by design, the walls contain no right angles.

Carpets. The kilim carpets, each with a diameter of 9.4 meters and placed in the centers of the drums, were handwoven in Varanasi, India. Looms were custom-built so the carpets could be woven seamlessly, and each carpet comes in a different monochrome color. The smaller, elliptical entrance rooms linking the stairwells to the main office spaces are fitted with hand-tufted carpets. All the carpets have been deliberately designed to be sound absorbent. 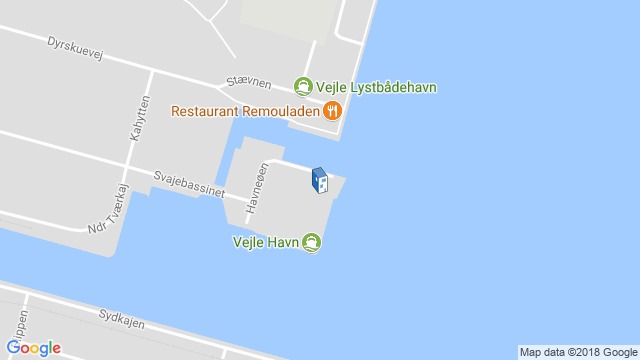 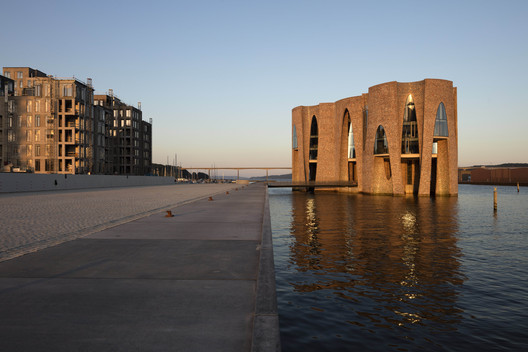