If you stand in Manhattan Avenue Park in Brooklyn’s Greenpoint neighborhood, you’ll see the Long Island City skyline across a small creek. On the Greenpoint side of the creek, a historic neighborhood of row houses and industrial sites is rapidly growing. On the Long Island City side, high-rise apartments and hundreds of art galleries and studios line the East River. Just a stone’s throw away, Long Island City can feel like a world apart from Greenpoint. That’s in large part due to the fact that only one bridge connects the neighborhoods—and it’s meant more for cars than pedestrians or cyclists. Isn’t there a better way? Architect Jun Aizaki thinks so. For the past few years, he and his team at CRÈME Architecture and Design have been working on the so-called “Timber Bridge at Longpoint Corridor."

The floating bridge would provide pedestrian and bicycle connections between Greenpoint and Long Island City, in turn activating public space on both neighborhoods’ waterfronts.

The project is still in its infancy. Right now, the team is looking for $50,000 on Kickstarter to fund feasibility studies and a light installation that would emulate the shape of the proposed bridge. If their Kickstarter can raise its goal by June 16th, 2018 the project will still need city approval.

CRÈME’s proposed design for the bridge features a lightweight timber structure supported on floating pontoons. Sitting just atop the water, the bridge would reduce travel time across between Greenpoint and Long Island City over the Newtown Creek from twelve minutes (on the existing, elevated PuIaski Bridge) to two minutes. But pedestrian convenience comes at a cost for commerce; barges wouldn’t be able to go under the bridge, so CRÈME has designed the bridge to pivot at its midpoint to allow waterborne vehicles through.

If implemented, the Timber Bridge would bring sustainably-built structure to the mostly industrial Greenpoint and Long Island City waterfronts along Newtown Creek. And when the L train shuts down for 15 months beginning in April 2019, Aizaki thinks the Timber Bridge could serve as a vital connector between the 7 train in Long Island City and the G train in Greenpoint. Even if the bridge isn’t built in time for the L train shutdown, the bridge would nevertheless provide intermodal connections between boroughs.

News via: CRÈME Architecture and Design 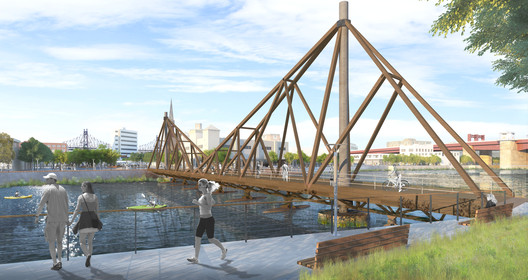