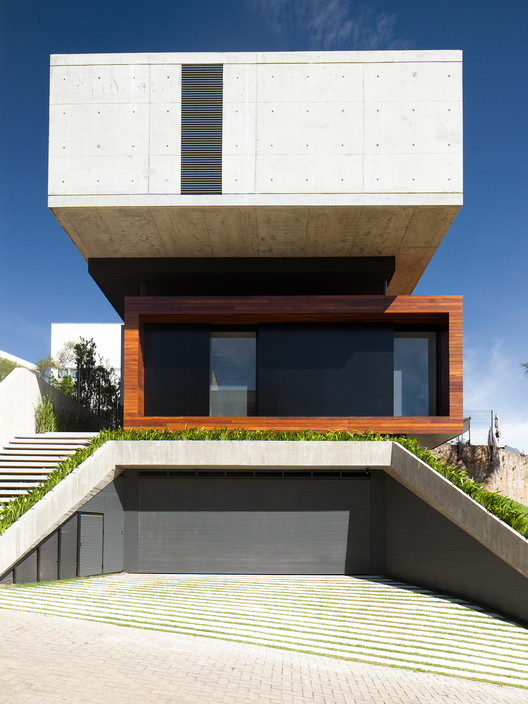 Text description provided by the architects. The project is situated in a suburban low-density residential neighborhood called Cacupé, in the city of Florianópolis, an island in the south of Brazil. That district is a short strip of land between the bay and the hills, occupied mainly by single family houses.

Most of those stand-alone housing are gathered inside private condos.
The landscape has changed a lot over the past years. Before, there were few small huts and fishermen sheds by the sea. The area was covered basically by untouched nature. Nowadays, with the growing urbanization of the city, that scenery no longer exists. There was a growth in construction and the condominiums took over the area along the main road and near the ocean. The new houses are concentrated in the lower areas, by the bay, transforming that space with higher density. City regulations establish a percentage of green land which must be preserved and that area was left to the top of the hills, at a farthest position from the water.

As you walk inside these condos, you realize that the houses in the lowest part resemble single house constructions, because they use the maximum land occupation allowed and minimum distances from the lot borders. As the view to the bay is the most valued characteristic of those terrains, the houses “battle” for space, overlooking one another to access the sight of the sea.

This project started out with a different perspective about construction in that area of the city and two personal desires.

The main idea was to preserve the original nature of the land as much as possible, which included pre-existent topography and stones, creating a minimum occupancy house. We sought for a better relationship between landscape and architecture.

This project was to be placed in a lot not so near the bay, nevertheless, it had a magnificent view, encouraging the client to invest in that particular space. However, due to the construction of the neighbor’s house, that view was partially lost.

The first desire was to recover it. The second wish was to build a contemporary house, with integrated spaces, aligning design and style with efficiency technologies.

The goal was to combine passive strategies with new tech systems in order to have a comfortable and energetically efficient home.

In order to preserve the landscape, the house was suspended, leaving most of the ground as a garden. That privileged position of the main floor allowed a great view of all the North Bay and even of downtown.

The underground level is the connection between the house and the street. That level has the minimum area as possible in order to fulfill the necessary program, including the machinery room, bathroom and garage.

The rest of the ground remained preserved. The architecture at this level is defined by a freely design geometry and the rough concrete texture. As the next ground level is a little suspended from the ground, it was possible to create a long continuous opening near the ceeling - allowing constant natural ventilation to these underground spaces.

The core of the house is the upper level, elevated four meters from the ground. It is a box with a large opening in the entire facade that faces the bay, therefore making that view a part of the house all the time. It is a home designed for a couple, without privacy restrictions, so the floor plan is totally open and integrated, containing bedroom, living room and kitchen in a single space.

Most of the ground level is a large terrace, partially covered by the upper suspended level, from where the residents can enjoy the entire garden and the pool area. It is a very permeable space, opened to the neighborhood

The layout respected the original topography, so there are stairs and platforms to create the connections between spaces.

Two big stones were also preserved, creating a stronger bond between the house and the landscape.

The only closed space in that level is a small but expressive wooden box, which contains two suites for visitors.

This area is opened to the amazing landscape to the west, while the service and closed areas, such as closet, bathroom, toilet, pantry and laundry area positioned along the east facade.

Those rooms get sun light and ventilation through roof windows directed to the north.

The West facade includes an especial awning system which keeps the house protected from the sun during the hottest hours of the day, without losing the view to the bay or the natural ventilation.

In the east facade, there is a composition of openings that incorporates the view to the green hills in the house and also guarantees natural cross ventilation through the main room.

On the roof there are fourteen solar panels which not only produce 80% of the energy consumed in the house but also shade the surface, protecting it from solar heat gaining.

Heat collectors were also installed on the roof in order to heat the water used in the house.

The roof also has a system to collect rain water. This water is filtered and stocked in the underground level, where it is treated with ozone. From there it is directed to the house for common uses.

The house is sustainable and efficient. Bioclimatic strategies were employed to obtain comfort and modern technologies were included to reuse natural resources.