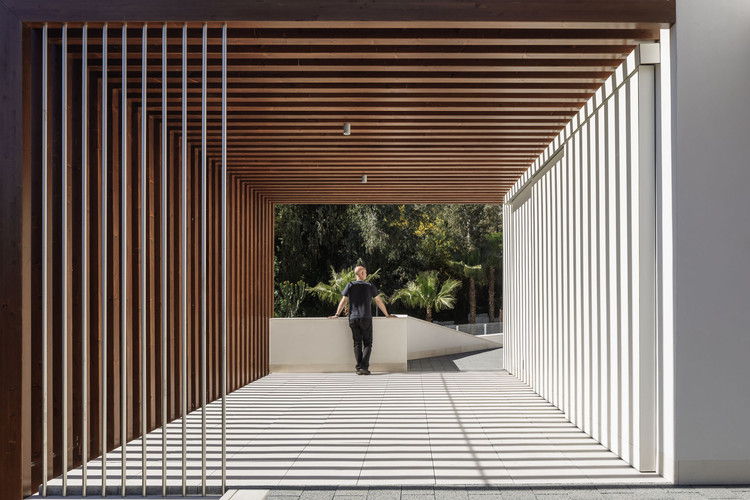 [implantation]
Located on a hillside, within an urbanization of isolated single-family homes, close and lacking in privacy due to the steep slope of the territory, the house is protected from the existing scenario, linking to the hillside and the surrounding vegetation. From the intervention, the retaining wall of masonry is maintained that located in the first line of a facade, serves as a protection to the views from the street and of zócalo to the positioning of the esplanade, located at an intermediate level of the hillside in which it sits the House.

Trees of medium size will be the acoustic and visual screen needed in the second line. The house will be formalized, within the adjusted area of movement of the plot, taking into account passive energy efficiency strategies and turning the view from the interior to the nearest mountain, in the north direction, where the promoter approaches his daily steps to travel the Route of Jarapalos.

[prefabrication]
The prefabricated construction will shape the spaces, providing textures and materiality. As a whole, horizontal and vertical walls unify the space, fusing exterior and interior. Thus, the quartering of exterior pavements transforms the habitable platform into a carpet over the territory, in which to dispose the dwelling. The Baupanel system that structures the construction, forms vertical and horizontal insulating panels, which rise on a ventilated floor. The earth cover extends the hillside and hides the habitability of the house from any higher point.

Pergolas of wood decompose the building in its extension in the environment and sift light and views as well as the translucent awnings. They protect from sunlight and encourage stays outside in this so benign climate, providing a more neutral atmosphere of light. Glasses and mirrors carry these sensations inside, breaking any physical limit. In rails and exterior walls, a mesh identical to that used in the prefabricated construction seems to stand out from it to be used by climbing plants, so, ivy and rose will upholster the outer layer.

[habitability]
The program is divided into differentiated modules that formalize the interior and exterior: day area with a versatile opening and closing system to different exterior spaces; night area vertebrate by a vertical-horizontal communication element that captures the different daylight, where a system of slats also allows its closure. The multiple openings of the day rooms to outdoor spaces with a different orientation, allow capturing the different shades of natural light that, treated to refine reflections and shadows, will change the spaces in real time.

The communication space is narrowed in its most extensive part, to serve as a study area, in which a window lowers its position to the reading table. The house takes off and approaches the hillside through an outer space linked to the night area, where the master bedroom extends to touch the retaining wall, thus forming part of the courtyard and becoming a sentinel to the transit of it. 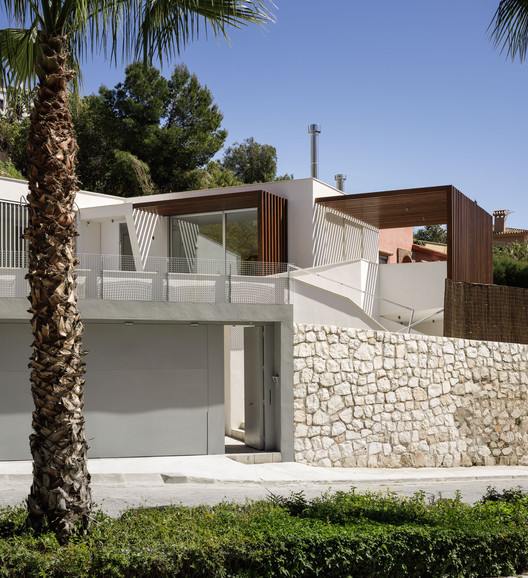