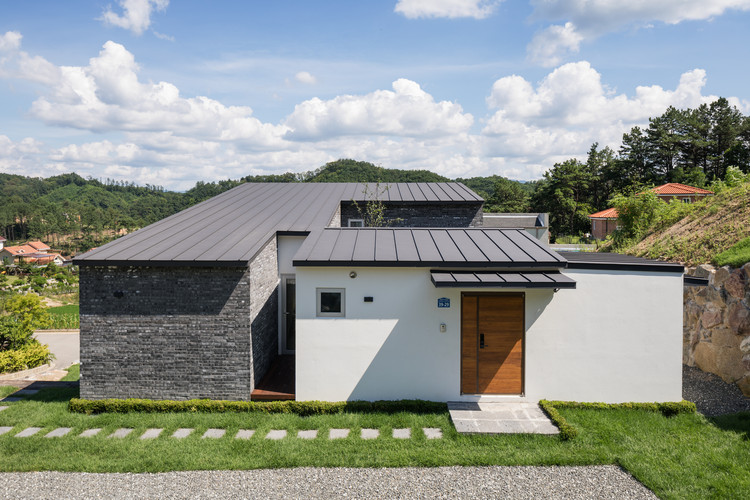 Text description provided by the architects. What does the second house mean to the client?
First, I want to ask what is housing.

I thought living as part of nature was the most important essence of housing.
A young couple with two daughters said they wanted to enjoy a life they had not experienced in an apartment. And I wanted to make them experience the unusualness of everyday life in spaces all over the house where they could stay for a while in everyday movements even though it would be a bit cumbersome and uncomfortable.

The site for a house in Hoengseong-gun, Gangwon-do was sitting next to the Seom River, around which there was already a village of detached houses and villas. When I first saw the site, Gageojiji (Ê¦ËÜñýò¢), the name of house in Hoengseong came up in my head, which means a good place to stay. Although the house is not their usual living space, I built it with the hope that they would understand the meaning of its name (Gageojiji) while staying there. And I also designed it with the hope that the name of the house would be fulfilled.

From the very beginning I considered the whole site as a house. And I tried to use the openness of the site to properly arrange the exterior space of courtyard and the necessary residential space. Furthermore, rather than being aware of the surrounding roads and houses, I placed the living room, kitchen and dining room facing the south to fit the terrain, bringing in the bright sunlight and panoramic views. Utilizing the level difference of 1.5m of the existing land, I placed the front porch in the north through which it is easy to reach the house from the road.

The entire mass is divided into three areas starting from the courtyard: a public space including living room, dining room, kitchen (LDK) and bookshelf; a private space for family; a moving space consisting of corridors and stairs. The courtyard not only divides them but also brings them together. The courtyard, which is part of nature brought into the interior space, is a natural background and serves as a central axis for both integration and separation. And the hallway between the courtyards on the second floor forms a wind path and naturally induces wind to the roof space. The private space consists of a room for the couple, a room for the two daughters, and a library and a room for the client’s sister (a writer). After being told that the client’s sister would like to read or write a book here if there is a chance, I designed one wall of stairs next to the courtyard as a bookshelf.

I do not think that a convenient space is necessarily a comfortable space. And I believe that there must be some inconvenience in the residential space to feel and enjoy the maximized comfort. I hope the client’s family would feel and enjoy the colorfulness of nature that they have not experienced in their apartment while living in the city, staying in the front yard, courtyard, backyard, stairway, hallway more often than in the room in their second house in the country. I also wish they could be able to sympathize with the meaning of Gageojiji.

2 COURTYARD  The courtyard, the front yard and back yard function as a transition space respectively by naturally connecting the inside and the outside.