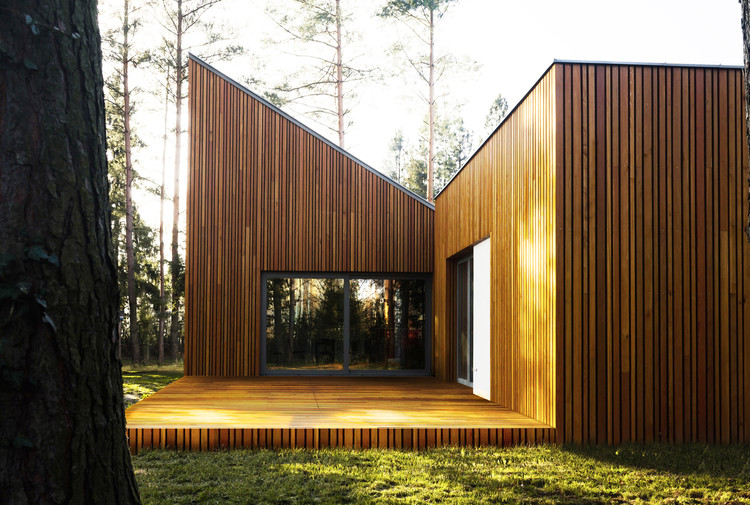 Text description provided by the architects. The building is located in Kuźnica Kiedrzyńska near Częstochowa. The charming location has become the starting motive for creating a peaceful enclave for a modern and active family while meeting all its requirements and goals.

The house is one-story. The functional system is based on the principle of clear communication being the backbone of the building connecting the day and night zone. One of the slants was adapted as an attic to an additional room as a children's parlor. In the front part, the first premise was to have a two-seat garage, but eventually, during the construction, investors decided that this area will be allocated to a functional office room.

The body of the building was based on a simple shape, varied by sloping roofs, which are the characteristic element of the building. As a result, an impression of lightness was obtained, and the location of the slants emphasizes the differentiation of the functions of the objects.

This is also a reference in the adopted functional and spatial layout. Large glazing from the southern side blur the boundaries between the interior and exterior, allowing ideological penetration of the forest inside the house. The large glazing in the front part, which was supposed to be originally a garage gate, was masked with divided into two parts shutter. This allowed obtaining a minimalist and natural in its expression facade.

The development area is located at the edge of a pine forest among holiday homes, which naturally inspired the choice of the facade cladding of the designed house. In combination with a simple but original shape, besides meeting the investor's expectations, perfectly fits into the unique location. 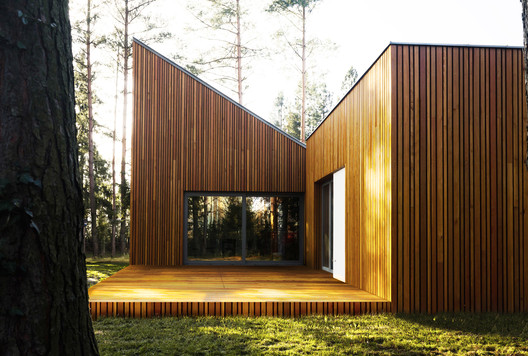