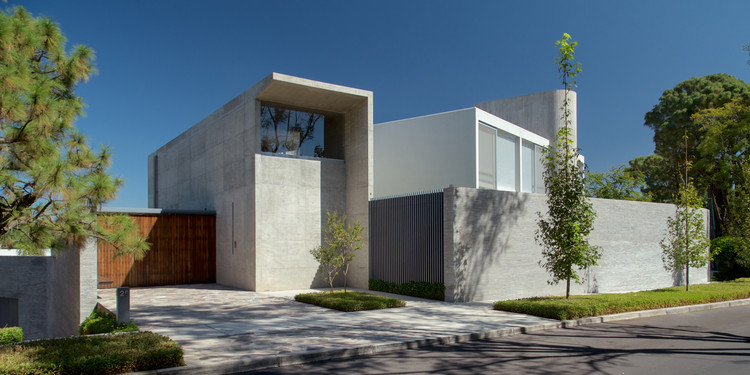 Text description provided by the architects. The property is located in a traditional residential subdivision of the city of Guadalajara that is sited between two hills, so most of the site has a considerable slope, as is the case. The lot is located on top of one of the hills, it has an area of ​​1,035 m2, and has an irregular shape that stretches and descends from south to north towards the glen, which is also the direction of important views. It is located on a corner formed by two streets: the adjacent in the south that is almost completely flat and the adjacent in the west that has a steep slope.

He is an engineer, who has a company that sells equipment and provides audio, video and air conditioning services. His hobbies are technology and automobiles. She is a housewife, who studied interior design and is decorating her house step by step. They have three children, a 16 year old boy and two 14 year old twin girls (at that time). They wanted a new house, the one of their dreams, comfortable and organized, in which all spaces were usable, with low maintenance, convenient for receiving guests, with a large garden, and a house that would serve as a showroom for their business; but above all, a house that improved the family’s relationship. This is the second time we design a house for this family.

Intention
The house was intended to respond to the urban context of the land, that is to say, that the solution of the house was to stagger along with the natural slope of the land, and with a generous and gentle gesture towards the corner. With the intention of taking advantage of the glen’s view, it was decided to gain altitude by placing the house over the highest point of the lot, which is at the same level of the south adjacent street.

It was decided to use exposed materials with low maintenance and with which the users can identify themselves. The house closes at its western end to isolate it, from the noise of the street (generated by the cars when going up), and from the radical west sunlight. It was well intended to build a safe house without rudeness or vulgar The internal paths of the house should be fun, inside an environment of freedom.

House Description
The house was resolved in three floors, with a “U” shaped scheme around a patio that creates many possibilities for lighting and ventilation in the spaces that delimit it.The house opens itself in a frank way towards the glen, closes with a blind concrete wall towards the west and opens in a little more subtle way towards the south to capture the sun and improve the temperature of the interior spaces. The patio along the transparency of the terrace generates the possibility of enjoying the view from a second line formed by the living room and the dining room.

The terrace, because of its location and dimensions, is the most important space in the house, it has several different ambiance spaces. It opens to the whole length, on the north towards the garden and towards the glen, while on the south it opens towards the patio. The slope on the west street is used to enter the cars one floor below, leaving the garage in the basement of the house, whose roof gives rise to the garden on the ground floor.

We decided to build the house with exposed concrete and perimeter walls made of apparent “rajuela” stone where it´s horizontality contributed to accentuate the slope of the sidewalk. The lateral servitude was used as a small pedestrian entrance plaza, it has a free visual towards the glen when you open the entrance door.