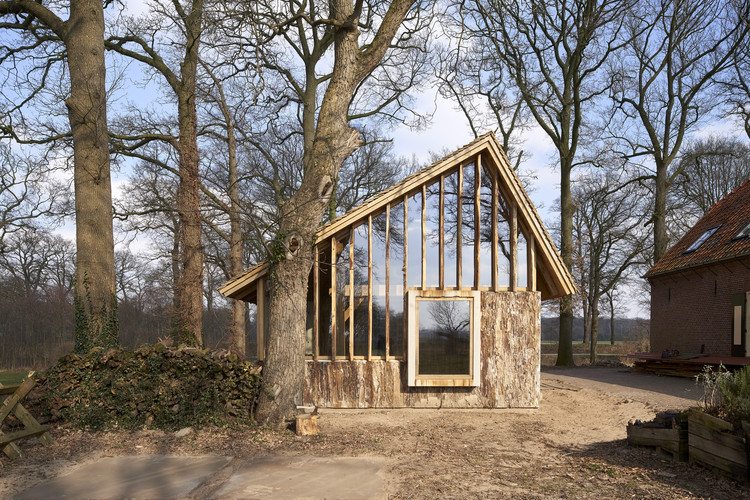 Text description provided by the architects. Traditionally, most farmhouses in the Meierij of ’s Hertogenbosch, a former administrative realm or bailiwick, have their separate parts such as living quarters, storage space and cowsheds integrated into a single building. Over time, however, these compact buildings frequently became too cramped to house all of these functions and a separate barn was added. These were usually built from locally available materials and largely followed the structural pattern of the farmhouses themselves.

In 2017 we were told that seven of the century-old oak trees in our yard were in bad shape. They had to be cut down. Instead of following the usual path and selling the trees to the paper industry, we decided to reinstate an ancient tradition. And so, by replacing a collage of obsolete shelters and sheds, we would, in line with our farm’s monumental character, build a new barn with locally harvested materials employing traditional techniques. Besides a couple of oak tree trunks we obtained from the nearby Wamberg estate, there would be enough timber to construct the new barn from the trees we had to cut down.

Our new transverse barn is constructed with four tie-bar couple trusses that are connected by longitudinal stringers topped by a roof supported by rafters. The roof has an asymmetrical geometry with a steep and a low pitched side. There are three spaces inside the barn: a carport, a storage room and a workshop/meeting room for office use. The loft above the storage room is open to the workshop.

A mobile sawmill was brought to the yard and used to cut the fresh tree trunks into structural timber for the frames and roof as well as planks for the façades. For this we used the best quality wood from the trees’ core sections and went in search of suitable uses for the remaining, less durable parts. Stanchions with bark were employed as slats to shield the glazing in the workshop and carport. Bark was mixed with concrete to construct the end walls so they would blend in with the wooded environment. Soft sapwood planks were used for concrete formwork to mould the imprint of fresh wood. Short lengths were cleaved and used as roofing shingles. The roughness of this cleaved timber ensures that this untreated roofing will last for decades. And finally, the rest was chopped and stacked for firewood in the barn’s recessed north façade.

Untreated timber, concrete and glass have been intermingled in various ways. The irregular dimensions of the wood used to build the formwork resulted in far from perfect concrete surfaces. Remnants of the sapwood formwork became embedded in the concrete and tannic acid from the fresh timber left discolorations. Iron and steel inclusions in the trees, such as barbed wire and shrapnel, presumably dating from 1944, brought imperfections to the timber. These additional circumstances created an unexpected layer of traces in wood and concrete.

The barn’s esthetics have been strongly influenced by coincidence. It lends this contemporary building a vital expression that merges old and new in a wonderful and extraordinary way. 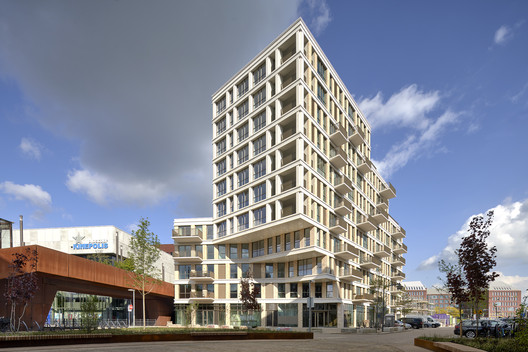