Save
What Are the Tallest Buildings Ever Demolished?
Share
Or
Copy

Not surprisingly, land constraints in dense urban environments along with greater financial potential are two key factors in the decision to demolish a building. CTBUH Executive Director Antony Wood said of the study, "We should be thinking of tall buildings as perpetual entities with lifecycles potentially exceeding 100 or 200 years while designing them in such a way that they can be creatively adapted for potential future uses.” However, according to the study, the average lifespan of the 100 tallest demolished buildings is only 41 years.

While economic considerations were most often the primary reasons for demolition, not all of the buildings studied were razed to clear the way for new towers. Structural concerns and even fire damage have also contributed to the ultimate demolition of buildings, such as the 116-meter Ocean Tower on South Padre Island in the US, as well as the 104-meter Edificio Windsor in Madrid respectively. (For the purposes of the study, the destruction of the World Trade Center towers in the terrorist attacks of September 11, 2001 was not classified as a "demolition.")

More than a quarter of the 100 tallest demolished buildings were built between 1890 and 1920, with the majority of buildings having been located in North American cities.

You can read more about the CTBUH and Tall Buildings in Numbers study in the 2018 Issue II of the CTBUH Journal, available for purchase here. 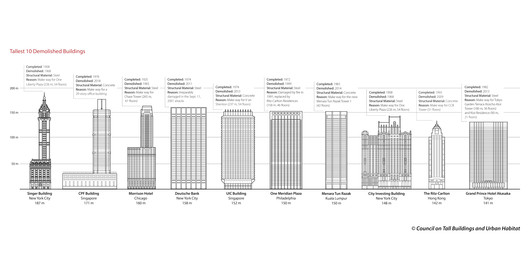