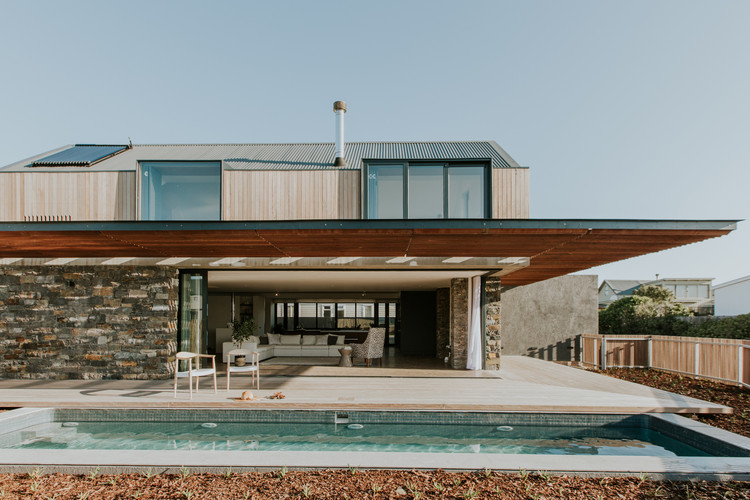 Text description provided by the architects. 5 Fin Whale Way is located in a tranquil coastal village called Kommetjie about 40km south of Cape Town, South Africa. It is halfway down the mountainous Cape Peninsula that juts out into the Atlantic Ocean at the south-western extremity of the African continent. The coastal towns around has an architectural heritage that stems from a combination of Cape Cottage architecture – a domestic form derived from the European medieval “longhouse” tradition, and Victorian architecture – adopted according to the climate and materials available at the time the settlers started arriving from Europe.

The dwelling is a three bedroom single family home situated in a private residential estate in the village. The magnificent coastline, mountains, and fynbos flora provide for a warm, inviting and relaxed atmosphere, no matter what season. This environment was the lens through which the estate’s design guidelines were interpreted. The guidelines intend to create an environment inspired by the principles of the Victorian timber beach cottage tradition of the Southern Cape Coast.

This resulted in the form giving devices like the double pitch roof, dormers, and lean-to roofs of the building. These are assembled around the primary focus of being connected, firstly to the outside environment - so that one can be at home without regret of having missed out on a beautiful day outdoors - and secondly to people in the community, valuing friendships and togetherness.

The ground floor is one connected space comprised of the living, dining and kitchen areas which are differentiated by their ceilings and the way they receive natural light. Each of these spaces opens up to outside areas, with differing degrees of intimacy. The living area opens entirely to a wrap-around outdoor terrace on the more public front façade. The dining room connects with a smaller outside area, sheltered behind high walls from the neighbors and south-easterly wind, with a fire pit to gather around. The kitchen opens to a narrow strip of outside space serving as a visual extension.

The traditional verandah of the Victorian Beach Cottage was developed by constructing a canopy cover of bent stainless steel plate to cantilever 2,5m from the building edge. Timber louvers are fixed underneath at an angle to allow winter sun deep into the living area but block it during summer to keep both external and internal living areas shaded. The first floor contains the main bedroom with its en-suite bathroom. Two north facing dormer windows were installed as bay window seats looking out towards Hout Bay’s mountains in the distance and relieving the low ceiling line suppressed by height restrictions to enforce a loft-like upper floor.

Looking at it externally, a prominent shape was the result, which in turn was cladded with timber to exude warmth and lightness. The timber cladding, though hinting at the idea of a cottage, was carefully detailed to read as contemporary architecture constructed with currently relevant and available technologies. The two dormer window boxes contribute to this language being constructed of 2,5mm bent stainless steel plate which enables seamless joints and clean detailing.

The structure of the timber cladded first floor is expressed with two deep stone cladded bastion walls, housing the cavity sliding door tracks and concrete columns, one of which extends into the living room forming a backdrop for a floating staircase. The house turns its front towards the street, acknowledging that it does not stand on its own, but with its neighbors form part of the larger context. 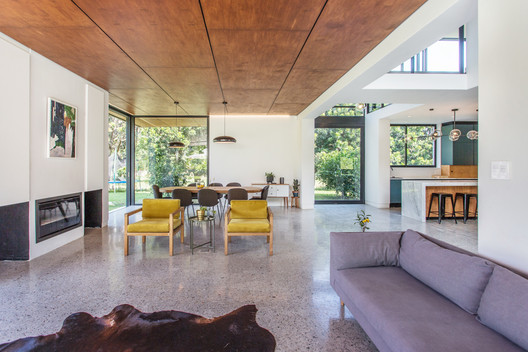 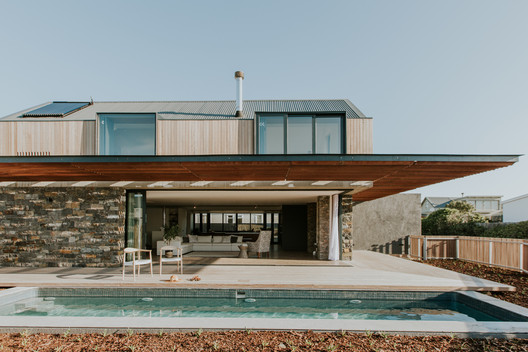