With timber to new shores
With a total length of 96.30 m, a three-field division proved to be a sensible system for the bridges. The Neckar is over spanned in middle of the building with 44.50 m, point symmetrical there is a foreland field with nearly 25.90 m length on each side. For reasons of manufacturability, a two-part cross-section was provided right at the beginning, which in the middle has sufficient space for cable runs.

The construction is defined by a continuous so-called “gerber-beam” (hinged girder system), which is adapted in the area of the large moments of support above the pillars in the cross-sectional height. A reference to historic wooden cantilever bridges was sought here. Various support members have stacked additively at the supporting point. Glulam beams with an increasing cross-section were glued to each other horizontally. At the end of the respective cantilever reduces the number of support members, so that slimming towards the center of the field is formed.

The sophisticated geometry of the double-curved bridge elements suggested the material wood. Finally, the historical context of the construction site also speaks for the use of timber: at earlier times, wooden logs from the Black Forest in the Neckar were loaded onto the river at the bridge site. From there, the wood then moved downstream into the European timber trade.

The underlying wood preservation concept of the bridge has given the deck an important function: watertight, coated precast concrete elements are placed above the wood structure and guarantee a permanent protection of the timber structure by means of gutters below in the joint areas.

To avoid the laterally attacking driving rain whose fall angle is specified normatively in DIN 68800 with 30 ° to the vertical, the support structure follows this specification. The rejuvenation of the stepped block carrier orients itself at this 30 ° line and is protected by the overhanging decking.

Wood is the only renewable raw material for load-bearing constructions compared to other materials. The use of about 250 m³ of wood binds about 225 t of CO2. In terms of durability, modern, constructively protected wooden bridges such as those in Neckartenzlingen are in no way inferior to steel or concrete bridges. 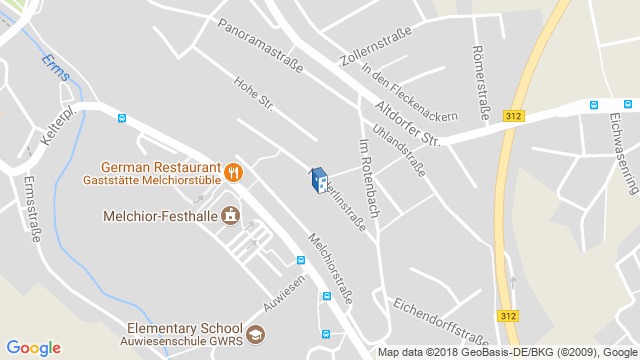 Location to be used only as a reference. It could indicate city/country but not exact address.
Share
Or
Copy
About this office
Ingenieurbüro Miebach
Office
••• 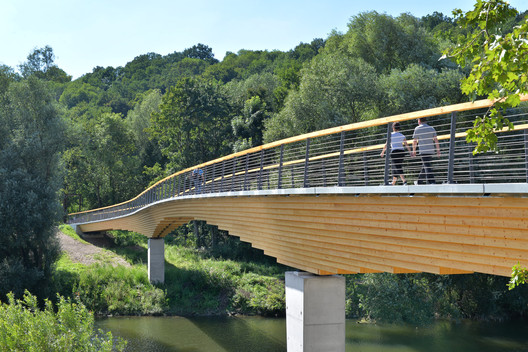