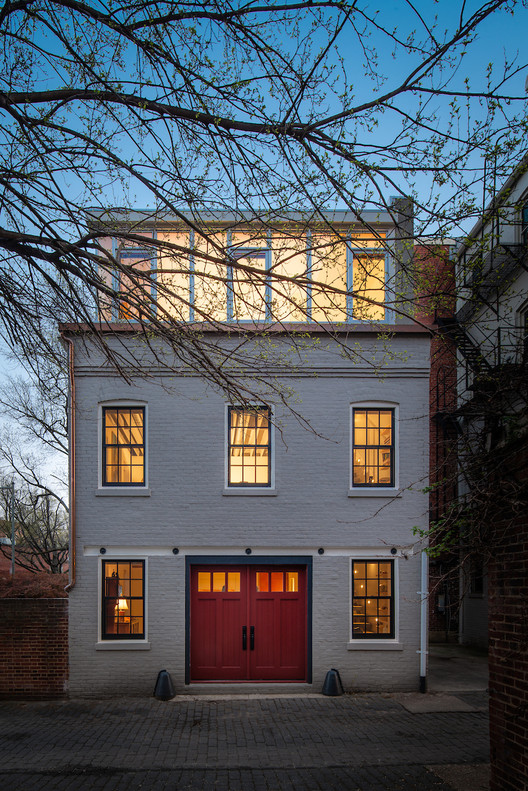 Text description provided by the architects. Coachhouse comprises a two-story brick building that was originally constructed as a garage between 1907 and 1911. It was historically associated with the adjacent mansion built in 1905, the rear of which is visible in the context photos. Coachhouse is situated on an alley and a major avenue -- Florida Avenue -- with a courtyard between the building and the street.

Measuring only approximately 25’ x 22’ in plan, the building is of robust load bearing masonry and wood frame construction. It was converted to residential use and subdivided to be on its own lot prior to designation of the historic district in which it resides in the 1980s.

The building is set back from the property line with its courtyard enclosed by a 6’ high brick wall; a second lower brick wall separated a parking space from the sidewalk. Coachhouse, in orientation and distance, is fully removed from the avenue on which it sits. Further, it has no rear yard nor windows on the rear property line, thus it is dependent on the alley and the avenue for light and view.

The building’s context is defined by the alley and rear elevations of large townhouses facing 22nd Street and R Street which range in height between three and five stories. In its existing condition, Coachhouse was dwarfed by its context.

Our client came to us with the goal of making Coachhouse their home. Their program required one more floor. Working through Zoning and the Historic Preservation Review Board, we gained permission to add one floor. Design goals for Coachhouse included the following.

1. Follow the principle of the second man, recalling Coachhouse's allegiance to its neighbor by mirroring the neighbor’s configuration of solid mass and sleeping porch.
2. Enhance the diminutive scale of Coachhouse in the neighborhood and on the avenue, and give it presence where it had little to none before.
3. Create a home whose character marries its several identities — part coachhouse, raw and exposed; part repository for the homeowner’s extensive and eclectic object collections; and part modern sleeping porch.
4. Bring light in along the west windowless party wall through the creation of a skylit stair zone.
5. Address the foreground of Coachhouse with a redesigned courtyard, and drive.
Embrace a sustainable agenda including the adaptive reuse of the building, onsite stormwater management under the courtyard, an efficient building envelope, all LED lighting, and a green roof.