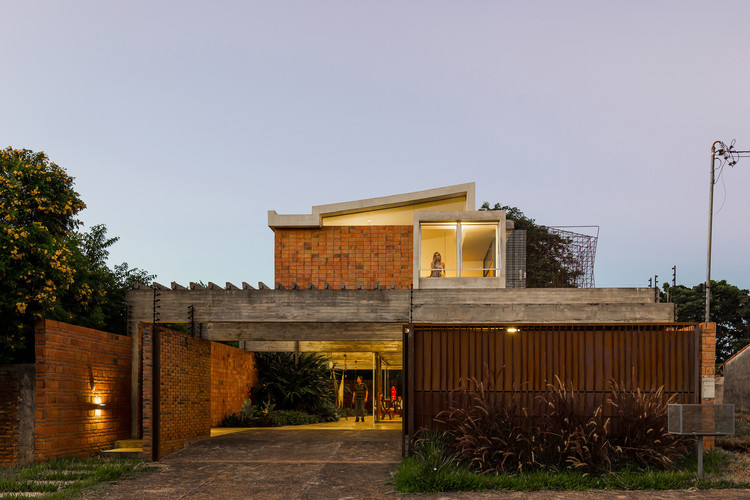 Text description provided by the architects. The project is set in a semi-rural area, in the limit of Luque and Asuncion, which are part of a cluster of cities called Gran Asuncion. It is next to the Ñu Guazú park (a green area of 25 ha.) which is located next to Asunción.

The Pajarera residence is built on a regular terrain of 12mts. X 30mts. The approach is clear: two volumes exist, both on the ground level and a first floor, based on a concrete beam structure in which six beams run from side to side of the terrain, organizing spaces between the two volumes.

The superior volume is over the beams centered on the terrain. Meanwhile, the lower volume is out of phase in respect of the former, creating a gallery.

The gallery is a typical element of the Paraguayan architecture, where the prolongation of the roof gives shade and protection of the elements, reducing sun incidence on the house, and let it open to the northeast, the most favorable orientation for the three bedrooms that are organized in line by a hallway.

The bedrooms connect to a terrace, that is an extension of the private places protected by a construction rod structure: “The Pajarera”

The composition of the materials, concrete, bricks, and glass allow a clear view and a fluid space between the concrete beams (naked structure) maximizing the continuous light and shade effects.