The Cuban National Schools of Arts, imagined by Fidel Castro and Che Guevara, and designed by Rocco Porro, are perhaps the most outstanding architectural achievements of the Cuban Revolution. The visual arts building, arguably the most provocative, was also a metaphor for Cuba’s past, present, and future. As you walk down the curved corridors, it’s impossible to see what lies beyond. The loss of time and direction became a metaphor for this new chapter in Cuban history. This building embodied both the excitement and apprehension within this new revolution with its idiosyncratic structures. This school was a true product of the revolution for another reason—the all-brick structures were influenced by the US embargo which caused Cuba to experience a shortage of steel. Unfortunately, Castro’s dream was quickly abandoned and the schools lost funding. They were deserted while under construction and still stand in ruins to this day.

Known by locals as "La Espada de Rusia," meaning "the Russian sword," the Soviet-era embassy is a looming reminder of Cuba’s relationship with the former USSR. Although the constructivist tower and surrounding compound now belong to Russian diplomats and represent a progressive political change, “The Russian Sword” still heavily dominates the city skyline.

Established in 1876, the Cementerio de Cristobal Colón was designed around a central cathedral, inspired by the Florence Cathedral. The cemetery is organized by a grid of central avenues and smaller side streets which arranges the space according to rank and social status. The wealthy and notable graves occupy prominent streets, and the lower class is regulated to the outskirts of the site. Walking through Colón Cemetery is like walking right through chapters of Cuban history, with more than 500 major mausoleums and family vaults built in styles ranging from renaissance, to neoclassical, and even art deco. More than 800,000 people are buried there, and because the real estate is hard to come by, after three years, bodies are exhumed and put into storage to make room for more interments.

Old Havana, the place where Camila Cabello famously left half her heart, is located in the city center where specific moments of architectural history and a hesitation towards modern progress are perhaps the most evident. Layers of the diverse imported styles make it a museum of sorts, and reveal brightly colored art nouveau, art deco, neoclassical, Spanish baroque, and Moorish buildings that line the narrow streets and open up into heavily used public plazas. This area is perhaps the most picturesque and well-known representation of Cuban architecture and culture.

Coppelia is another mark Castro left on Cuba, representing his interest in the modernist style and his love for ice cream. Built on the site of a former hospital, the building itself is one of the world’s largest ice cream parlors and features five massive white granite discs annexed to one great helicoidal staircase. The space is contained under one large roof with colored glass and wooden panels to divide up seating areas. This state-run parlor looks like a spaceship that crashed into a forest of palm trees, and serves 35,000 customers each day.

The Hilton Hotel, which opened in 1958, was once a symbol of capitalism. It was a place where Americans could escape to a foreign land, while still being afforded the luxury of a cheeseburger, or an air-conditioned suite. It represented a shift in Cuba’s alliances and a place where international investors were invited with open arms. However, after being open for only six months, Castro closed down this symbol of American influence, converted it into his provisional headquarters, and invited other Latin American leaders to hold posts there as well. His office was set up in room 2324 and was where he filmed press conferences and announcements. Now, the hotel has been returned to its original use, and is currently called the Habana Libre.

Revolution Square, the city’s civic center which now sits as a large parking lot, is another reminder of the Cuban Revolution. The site features landmarks including the famous Jose Marti Memorial, a place where Castro once stood and addressed his people. The edge of the site is held by other Soviet-era buildings which have been transformed into monuments through welded artwork depicting Che Guevara and Castro’s confidant, Camilo Cienfuegos. 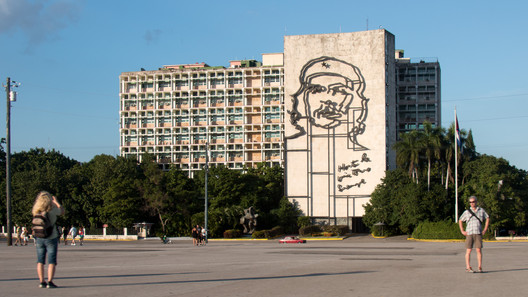