Save
Russian Pavilion at 2018 Venice Biennale to Explore Rich Railway History
Presented by:

As part of our 2018 Venice Architecture Biennale coverage we present the proposal for the Russian Pavilion. Below, the participants describe their contribution in their own words.

The Russian Pavilion is delighted to present Station Russia, which explores the past, present and future of the Russian railways. In an environment which is in parts uninhabitable, to the extent that roads cannot be built, railways have become the lifeblood of the largest country in the world. Station Russia explores how they, and the people who use them, negotiate the vast and often empty expanse of the Russian landscape.

In a new exhibition conceived and created for the 16th Venice Architecture Biennale, the national pavilion has been transformed into a train station. Within its five ‘Halls’, contemporary Russian architects, designers and artists use sound and multimedia installations, as well as photographs, models and artifacts, to explore the past of the network and to present their vision of its future.

The exhibition is supported by JSC Russian Railways, whose involvement reflects its pivotal role in maintaining the strategic importance of the Russian railway network. The focus of the exhibition forms a parallel with the history of the Russian Pavilion itself, which was inaugurated in 1914. The building’s designer, Alexey Shchusev, was also responsible for the Kazansky Railway Station – the Moscow terminus of the line which first connected the capital with Ryazan, in the south east of the country, and beyond, to Kazakhstan and central Asia.

Hall 1: The Geography of Free Space

The first hall of the Pavilion demonstrates the complexity of the railway system that spreads throughout Russia’s vast empty spaces and multiple time zones. An infographic installation by Russian artist Arden Vald presents the country’s railways as both its circulatory system - its living, vital veins - and as its backbone, supplying crucial connectivity for the Russian populous, who depend on this form of transport as the only way to navigate an often formidable landscape.

In the central hall of the Pavilion, The Architectural Depot showcases plans and models of train stations past and present, such as the renovated station at Sochi (Studio 44, Architect: Nikita Yavein) and the proposed High-Speed Rail connecting Moscow to Kazan (Metrogiprotrans, Architect: Nikolai Shumakov).

A large-scale installation, suspended above the central stairwell, recreates the first Russian voksal – or Vauxhall - a train station and Pleasure Gardens in the suburb of Pavlovsk, built in the early 19th century, which functioned both as a terminus for the first Russian railway and as a summer retreat for St Petersburg’s elite.

Hall 3: The Waiting Hall of the Future

The Waiting Hall of the Future presents two projects dedicated to the future of habitable development surrounding train stations: a re-examination of the futuristic New Unit Settlements (NUS), first shown at fifty years ago at the Triennale di Milano in 1968, and a showcase of proposed developments around one of the busiest railway termini squares in central Moscow, put forward by a new generation of contemporary Russian architects, Citizenstudio and Studio 911 (Citizenstudio: M. Beilin, D. Nikishin. Studio 911: V. Krylov, A. Churzin, I. Assorov). Titled “A Dichotomy of Free Space”, the proposals reflect on train stations in other megacities to suggest ideas for how the area around Moscow’s train station might be repurposed. On the walls of the gallery, Graffiti artist Anatoly Akue has created an imagined visualization of the urban surroundings of this future space.

Hall 4: The Crypt of Memories

In The Crypt of Memories, the walls of the Pavilion’s lower gallery are lined with steel cabinets, mimicking a traditional luggage room. The lockers, which visitors are invited to open and explore, hold ‘lost and found’ property: historical artifacts, including Soviet memorabilia, which reveal the history of the material world behind the Russian Railway.

Hall 5:  Aboard the Free Space

The final hall of the Pavilion brings the significance of the railway in Russia full circle, with a short film by director Daniil Zinchenko. Presented behind the frosty window of a train carriage, Seven Days in Seven Minutes shows Daniil’s journey from Moscow to Vladivostok, an excursion of 9,300km along the route of the Trans-Siberian Express, to meet his long-lost grandfather. The film offers visitors to the Pavilion a marked contrast to the heat of Venice, and highlights again the vital role of train travel in the country, as well as giving a human aspect to the connectivity it facilitates. 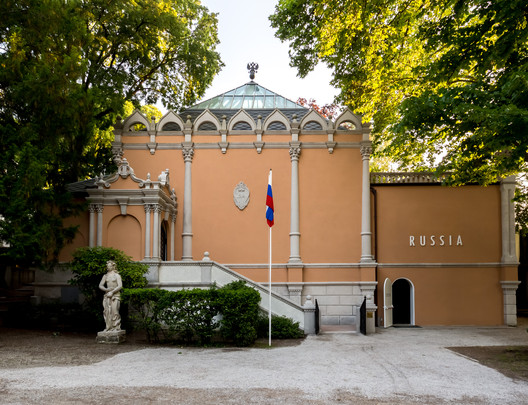