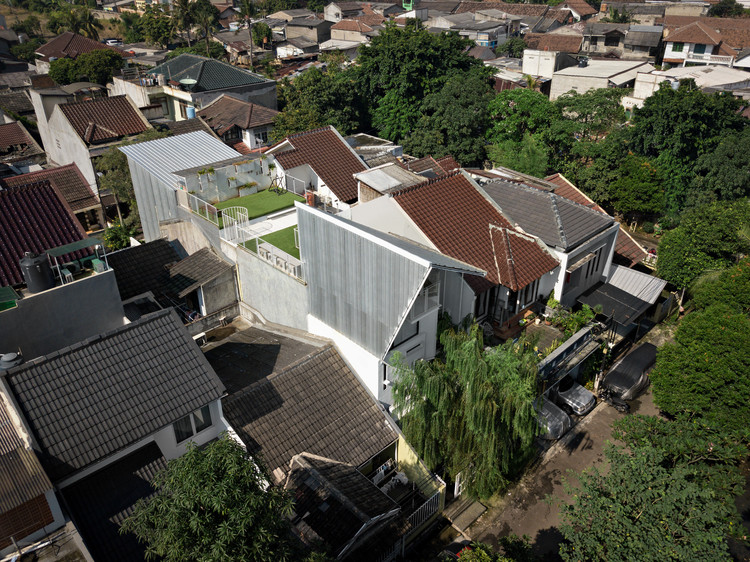 Text description provided by the architects. Along with rapid urban development in Indonesia, urban population growth is progressively increased. It has an impact on the needs of facilities supporting the urban activities for its citizens, one of which is residence. The consequences of meeting these needs compel the government and housing developers to provide a residential plot system.

This plot system is addressed with the concept of growing house, that both the owner and the occupants have an opportunity to develop their own house. The concept of a growing house (rumah tumbuh) or multistep development house become a breath of fresh air of a home for couples or families in urban areas, in addressing the basic needs of the housing or residence.

The growing house is a concept of developing a house with several stages within undefined periods depending on social, economic, and environmental conditions. The concept of growing house tends not to destroy the existing building as it has the outlook that the house is a Living monument.

Rumah Gerbong is one example of well-recorded growing houses in the development of urban society, in its social, environmental, and economic status. The term of Rumah Gerbong (Gerbong = railway coach) is adopted from the final typology of the extended building.

Just as the typical growing house, Rumah Gerbong also undergo various kinds of evolution, in this case there are 2 evolved things alongside in the growing house. First is evolution of form in physical, aesthetics and function; the second is evolution of social, economic and environmental status, of which this point greatly influences physical evolution.

The embryo of Rumah Gerbong began in 2000 with the land area of 90m2 and building area of 36m2 located in Bintaro, a development area by one of the area developer in Indonesia. As for young and new family in an underdevelopment environment, homeowner purchases house for shelter, with mostly inadequate capacity for couples, with their hardly considerable needs and desires.

Evolution 1 (House for live and work)

In 2003, there was a change in social and economic status of the couple. The birth of a child in this small family, and the husband, an architect with a slowly growing work who ran his own firm from home, forcing the couple to add space and function of this house, that the addition also had an effect on the facade or aesthetics.
The addition of space was extension of floor, which the original small house was expanded into 2 floors with composition of the front area for public/office and the back area and upstairs for private zone separated by the inner court.
During the span of 2003 to 2006 the social and environmental life of the neighborhood was also evolving, indicated by the neighboring house behind of the different alley offering their house that this family could buy.

Evolution 2 (House for live and work)

Within a period of 2006-2007 the first phase of Rumah Gerbong, with the scope of work by consolidating two opposite houses into one integrated house, that it has two different facades. The completion of this 3 phase house also made a developed non-physical evolution, of which name of Rumah Gerbong became well-known as being one of the IAI Jakarta Award nominations, an architectural award held by the local architects/committees of Jakarta, and included in several printed publications.

In 2016 the development of Rumah Gerbong restarted, the development was prepared as non- physical factors (social, economic, and environmental) began to develop significantly, which was the owner desired to move and add his office area, while the wife sought after a career in running a home business, and the children wanted to get closer to their family.

Exploration of Rumah Gerbong in terms of shape, function, and budget produces several prototypes. This exploration has a common thread in typology that is, first, Pilotis 3-storey house design, as the selection of Pilotis strategy was to address the house development to add functionality without destroying the existing building in large scale and the addition of simple structure.

Second, the home zoning functionality was divided into 3 parts of compartment which were the living compartment (residence), business compartment (office and boutique), and social compartment (ground and roof floor). Business and residential compartments is each opposite facade to facing the street.

Third, the building has a vacant area for accommodation of wind supply, light, space for tree or plant and human interaction that will be designed in the house, that by the addition of empty space in the form of interaction space, therefore the disorder in terms of circulation, privacy and integration of existing compartments can be minimized as small as possible.

The end of 2017 has turned into the climactic peak in the construction of Rumah Gerbong, with several additional functions in compartment space. At the end of its development, the house had 3 compartments for live, work, and interact. As the function of living and work compartment facing directly to the street and having opposite facade, while in the middle, the contact between the opposite function was muffled by the function of social/interact compartment. The strategy of breaking the density and contrast of functions (living and working) by adding new functions in the form of empty space and interaction space produces a new distinctive typology with strong functional synergism, that the architect named this strategy as krowakisme (krowak = perforated, partially hollow).
Living compartment contains 1 master bedroom, 1 bedroom, living room, bathroom, reading room, praying room, and service room. Working compartment contains workspace and mini home library. Among living and working compartments there is a social/interact compartment, with the composition of mini amphitheater, public kitchen, living room, and green rooftop.