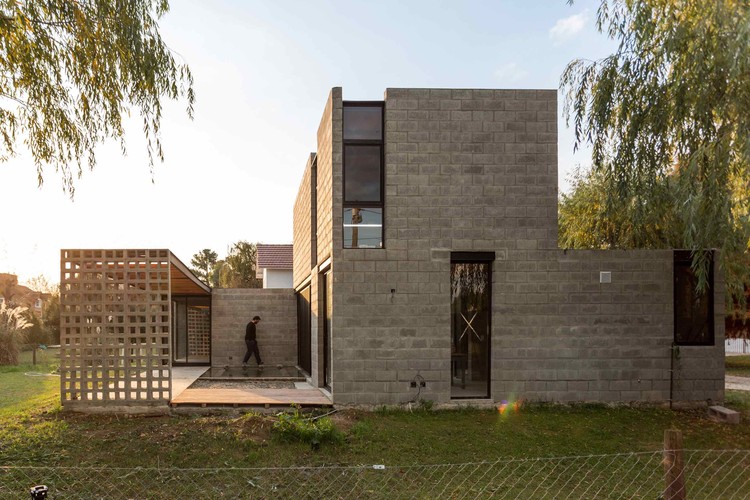 The search for design spaces that characterize the residence is marked in the belief of time as a design pattern, which takes different logical structures depending on their specific characteristics in relation to what surrounds them. In this sense, the PRO.CRE.AR House adopts as premise two instances: the first in relation to social structures and the second in relation to technology and costs.

Such social structures take form from flexibility as "dynamic space" where the rationalization of it creates, in an empirically way, the spatial experience.

Thus, the residence is built for a growing family, that is, for an hour it is a couple with a daughter, but taking a priori the logic of mutability and spatial flexibility, it is allowed that the house is inhabited by different modes.

The PROCREAR EP house, is held in the context of a national government initiative to promote the construction, expansion and reform of single homes through a mortgage loan of no more than $ 500,000 (Argentine money). During its launch in 2012, many families resorted to it, and as a consequence, the demand in the design and construction of homes increased. In this sense, the residence dialogues with the first illusions and aspirations of a growing family that has a credit and some savings of the same value to make this house a visible space, a home. The residence is found on the outskirts of the city, in a suburban neighborhood where the urban fabric is still low density, but even so, nature is scarcely present because of man's intervention within a medium density without large spaces of vegetation and little use of the possible views.

Architectural specificity reduces to the use of a single material, a single technology that defines spatial modes and instances. The concrete block feature allows you to create filters, bellows, held spaces, walls and even sidewalks. In addition, throughout its useful life it can be changed or replaced.

The time recreates various atmospheres and uses, which is why, spaces are figured out in terms of design as fixed and flexible, as a contemporary reflection of the Kahn spaces of service and served spaces, where the fixed is composed only by what it could not move technologically or, more than that, by a dynamic that always articulates the flexible program. Meanwhile, the flexible itself, which are the bedrooms, the living room, the mezzanine, the gallery and the balcony, can vary their growth and their adaptability over time.

The proposal for a credit viability, is specifically based on the costs reduction and the possibility of a residence with identity and protagonism that is not underestimated a priori by its raison d'être. That is why we define a logical and very marked consequence of the dominant aspects: mutability, identity and costs.

The notions of place are rationalized in the work itself, but in this case, the residence that is of permanent use, receives new logics that make of time an instance of growth, wisdom, nature and poetics. The gallery and its inner courtyards articulate these logics, shows nature in a rational way with the will to be transcendental.