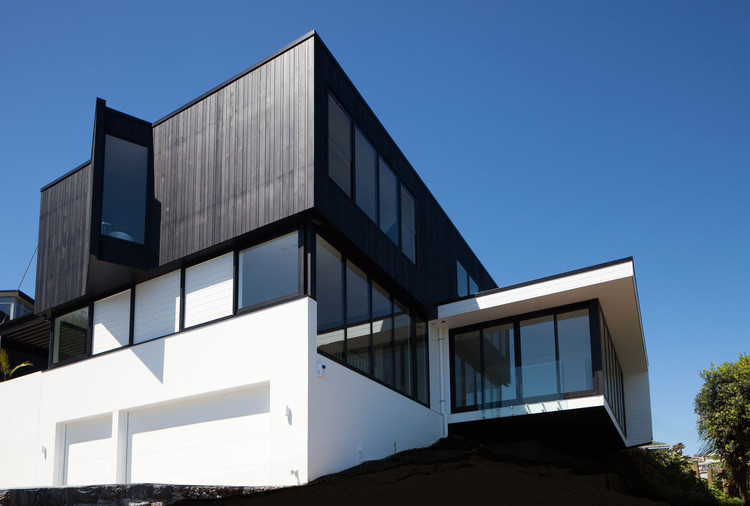 Text description provided by the architects. The design of this home was a direct response to its site, being south facing and on a steep bluff overlooking Hobson Bay, a city fringe suburb of Auckland, New Zealand. “It had great views back to the city, and my client asked to be able to stand in her kitchen and see the Sky Tower,” says architect, Paul Leuschke. The issue was there was no building platform. “It was a delicate exercise in making the most of a not-so-favorable site facing the wrong way [for the sun] and on a cliff, plus achieving a degree of separation from its neighbors.” says the architect.

Following some substantial remedial work during up an existing driveway, the form of the new house comprises two boxes over three levels – a ground-floor volume constructed using smooth-plastered concrete-block, containing a motor court and three-car garaging and an upper volume, clad in dark-stained vertical cedar housing the bedrooms. Between the two boxes is the stair, with a bridge above between the parent's ensuite and the children’s bedrooms.

Sandwiched in between, the living spaces are surrounded by an almost continuous ribbon of glazing that not only allows in much-needed sunlight in from the north but also affords great views out towards the city to the south. “To stretch the view further, we cantilevered the family room out over the cliff,” says Leuschke. “This allows the family to see further around the bay towards the harbor and tha marina below.” As a bonus, the architect gave his client a private yet perfectly framed vista of the Sky Tower from her bathtub by popping out a narrow vertical section of the upper story.