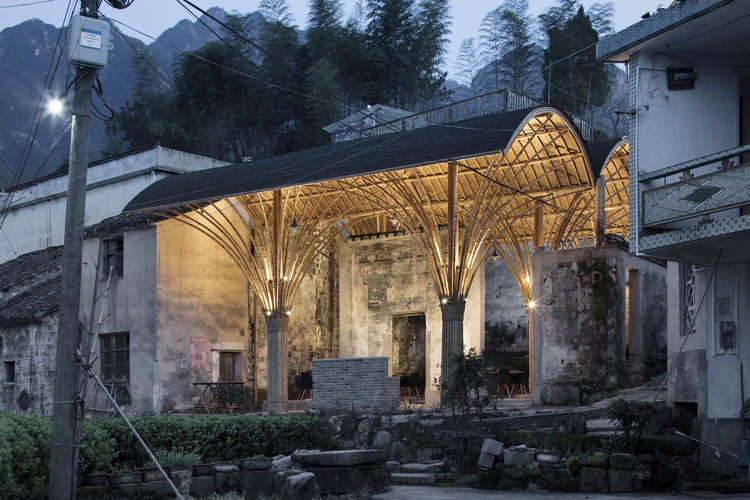 Text description provided by the architects. The village lounge in Shangcun is a renovation project from the ruined courtyard into a public space, providing leisure and multi-used space for both local residents and tourists. The project is marked by the government as an exercisable and regional approach and a starting point of the preservation and sustainable development of this traditional village.

Shangcun village is located at Jixi County, Anhui Province, with a history of more than a thousand years since the first immigration in the late Tang dynasty. The village was built near the mountains, which enables that the village enjoys good ecological resources meanwhile its historical heritages, such as the traditional residences, are kept undisturbed from the urbanization.

The site locates in the join point of several village paths, and it is turned into a small plaza, integrating the paths of different elevations with ramps and providing a public space with covering for villagers meanwhile maintaining the fabric of the village from the top view.

The site of the project is the former courtyard of the Gao's family on the front street of the Shangcun village. The main structure of the old house has collapsed due to the lack of maintaining and the only remainings are part of the old walls, the foundation of the house and the patio.

The design solution is grounded on the principal of minimal intervention, adopted a layout of multiple units using common local material – bamboo – to construct 6 sheltered large space. 3 in a row and 2 in a column, the six 5mx5m spaces form 3 sets of bamboo canopy with black awning, providing a shared space hosting the activities of the village locals and the visitors.

The project collected and organised old black bricks, black tiles, stone and usable timber from the site to form landscape elements based on the original layout of the courtyard and infrastructure construction, such as the maintaining of the old MaTau walls, and the construction of the stone retaining walls with traditional techniques, meanwhile local craftsmen shared their ideas about the details, planting and decorations, which also made the lounge something that actually grew in the village. The bamboo umbrellas, apart from traditions, are built with modern architectural techniques by professional bamboo craftsmen, in order to ensure the durability of the bamboo components, and the other part of the lounge and the landscape is completely constructed by the villagers themselves.

The villagers also show great enthusiasm in the usage of the lounge. It came into use right after its completion as a place where the villagers and tourists can get a chance to sit together, chatting about different lifestyles and enjoying the entertainments, as well as a place for village group activities and history and culture exhibition hall. As one of the few public spaces in the village, it won the approvals of all the villagers. And as a new member of the village, it managed to blend into the environment and activate the old village.

The configuration of the bamboo umbrella and the arch of the black awning originated from an experiment to simplify the structure and reduce the scale of the roof. The black tiled vernacular buildings in the village has an average roof depth of 5-6m. When viewing from the hill top, the canopy has a similar scale that blends into the fabric of the village, providing a public space for meetings and entertainment. The height of the umbrellas varies according to the change of the elevation of the ground, meanwhile the lifting roof allows people inside to see the decorative facade of the traditional residence on the south. 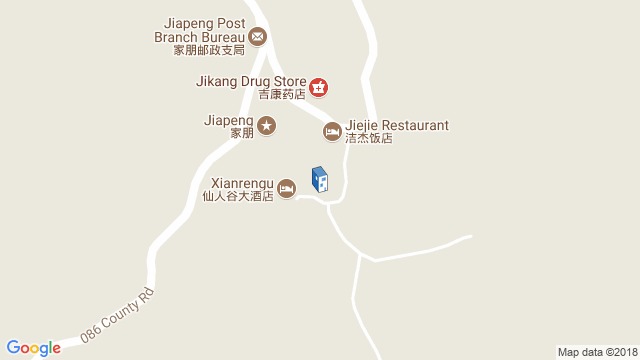 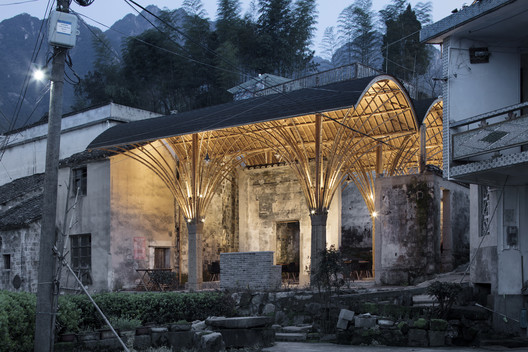