Save
Los Angeles Is Painting the Streets White (Again), and Your City Might Be Next
Share
Or
Copy

Last spring, the Los Angeles Bureau of Street Services tested a new, creative approach to combat the rising temperatures in the city center. The pilot project covered one neighborhood street in each of the LA's 15 council districts with CoolSeal, a more reflective asphalt-based coating developed by California-based company GuardTop. After seeing a difference of 11-13 degrees Fahrenheit on the coated streets, Los Angeles and other cities plan on implementing more reflective roofs and pavements to reduce the side effects of "heat islands."

More on the CoolSeal coating and the fight against heat island effect after the break.

According to the Washington Post, CoolSeal was originally used by the military to conceal grounded airplanes from spy aircraft using infrared cameras. While the test application in LA's neighborhoods did yield impressive results, there is a minor drawback. The coating costs about $40,000 per mile and lasts seven years.

The Environmental Protection Agency defines a "heat island" as a place where open land and vegetation are replaced with infrastructure, buildings and roads. The substitution of more moist and permeable environments for drier and less permeable environments causes dense urban regions to become much warmer than the surrounding areas. This "island" can often be more than 50-90 degrees Fahrenheit warmer than the air temperature.

According to the Los Angeles Times, the mayor's office hopes to have a 3-degree difference in temperature by 2019. Thanks to the initial testing last year, the city now knows some of the best tactics and strategies to begin working toward that goal, as well as a better idea about where to begin within the city itself.

Since the pilot program using CoolSeal last year, GuardTop has received inquiries from all over the world, including China, Israel, Australia and Saudi Arabia, according to the Washington Post. So it might be safe to say this trend in environmental design could be here to stay. 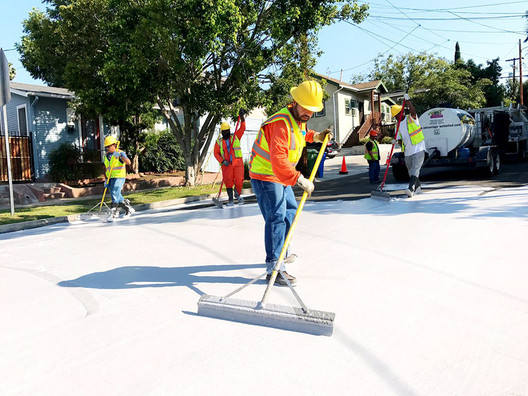