Native order
Compared with the mass development of cities in the recent three decades, the Chinese villages rooted in traditional agriculture civilization still maintain the overall rural spatial characteristics of "architecture with no architects ", presenting a kind ofnative order under the traditional social background. .Now, this spontaneous state is encountering clashes from urban civilizations. The LEIHouse is a typical case with reference value. The house is located in Shanyinwu village in Tonglu County in Hangzhou, not far from the administrative center of the town. Most of the houses in the village have been rebuilt in recent ten years and belong to the typical "new rural" style. From an architectural prospective, traditional architectural features that can characterize this area are hard to be seen.

The site of the project is an ordinary house located in the village. The whole area is about 200 square meterby the hillside facing the valley and a reservoir. The owner wants to live in the house while providing  accommodation for travelers. Homeowner Ms. Lei, as the founder of "Ruralation", a local successful Bed and Breakfast brand, is an influential "Exemplary new generation" in the area.She is also in urgent need of demonstrating a brand new value through the project and seeking a model for rural economic and environmental improvement. This is also a new opportunity that all villagers expect to see in rural development.

Settlement: The layout of the project follows the basic arrangement of village farmhouses. It faces the valley and main road on the south side, forming an open courtyard backed by the hill. The three-story building is in square shape and aligned with the contours of its neighboring houses on both sides.Except forthe various type of vegetables and flowers planted delicately in the yard and on the roof, easily seen whenever one approaches the house, this gray stone object is even more difficult to notice comparing to its white-and-red decorated neighbors.

Types: The house has a brick and concrete structure that is most commonly used by local artisan. The three-story height, the simple vertical volume and the limited window opening together with the exceptionally compact interior space almost dated back to the old rammed earth houses in the local area. Due to the large availability of scrap collected from local stone processing factory and the many skilled craftsmen, there is no extra cost for the construction of this castle-like house, which gives the female homeowner a sense of security and belonging. The efficient use of the interior and the flexible arrangement of stairwell inside the house smoothly connected the functional space of each floor andguided the natural light from the top and also the sides into each corner of the house, making the visiting neighbors very curious. .

Industry: The cyan slates are the scraps of a nearby stone processing factory, whose stone is used to decorate the city's buildings, roads and public squares at a mere cost of transportation. The stone wall masonry isnot only a continuity of the local tradition of “She”( one of the very rare Chinese minority group) whenbuilding walls and dams, but also an introspectionof the new ways of brick veneer for farm house. The successful use of stone scraps in LEIHouse led to the rise of "scrap"price from the neighboring stone factory. Perhaps the factory that previously provided materials for urban construction turned out to have more opportunities from local demands.The Bauhaus-style bamboo chandelier actually came from a skilled bamboo craftsman in the village. It is the result of numerous tries taken by Ms. Lei and the craftsmen. By using thick soil cultivation, the plants and vegetables thrive with no fertilization and pesticide on Lei's roof, while most of her neighbors depend heavily on those chemical additives.

Confronted with new technologies, especially the sudden appearance of advantageous industrial products, native construction skills that are more often associated with individuals would easily lose confidence. The "blocks" that were heavily used in walls and landscapes ofLEI House, attempt to reestablish an association between technology and craftsmanship. The concrete hollow blocks in rural areas are usually cheap construction materials, but after being reconfigured by architects and craftsmen, they can perform as well as masonry in space composition and expressiveness.

Efficiency: The logic of masonry is also used in the 3D printed pavilion in the courtyard, with the PLA 3D printed unit replacing the standardized block, the transparency of the hollowed bricks was further emphasized. The translucent materials and space is realized by the combination of accurate digital control and flexible manual adjustment of scale and components. No matter how advanced the technology is, the judgments of efficiency is on two levels- its own physical properties being the basis, the parameter setting as well as the possibilities of optimization would be a critical perspective that might contribute towards eliminating the contrary between technology and craftsmanship.

Networking: Limited budget, the lack of professional management team and the continuous loss of local artisans are common problems that rural construction faces. Based on 3D printing technology, industrialized pre-fabricated assembly system, off-site processing and supply chain transportation, the locally assembled system can minimize the damage of construction made to the local environment. In the 3x3x3-meter space in the front yard of the LEI House, the pavilion of 400units was completed in one month by a network composed of three vendors in Beijing and Nanjing. Two inexperienced villagers were able to complete the assemble work in three days. In this case, architects explored the direction of rural construction supportedby modern technology and oriented by efficiency with restraints of rural conditions..

PLA: The time and material consumed in three-dimensional printing directly affect the project processing time and construction costs. Lightness becomes the core pursuit of designing, in line with thepractical conditions of rural construction site that is often small and in lack of professional equipment. With the flexibility of density by 3D printing, the corresponding density parameters can be set according to the mechanical calculation of different units to create a translucent effect. The transparency and texture of the pavilion contrast sharply with the heavy volume of the dense castle-like stone walls. Their extremely simple forms correspond nicely with each other in the rural setting, forming a pure, retrained, pristine yet mysterious futuristic rural touch.

On the long way back to Mother Nature, human beings might find rural settlements a naturally advantageous spiritual shelter.The anti-commercialization traditions, counter-technique thinking, the desire to reshape their communities, the artisanship in rural architecture anddigitalization of countryside might be an effective path to remodeling sustainable human space. 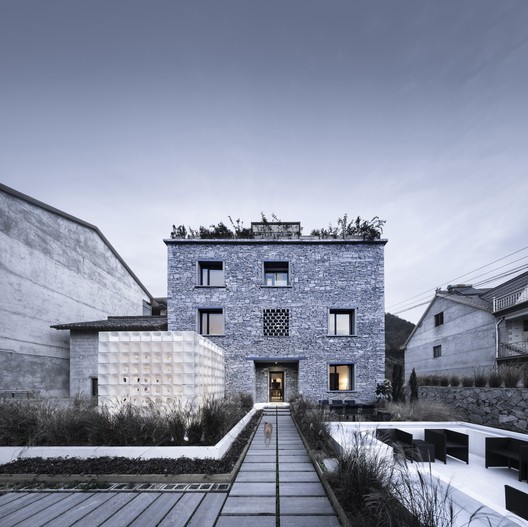