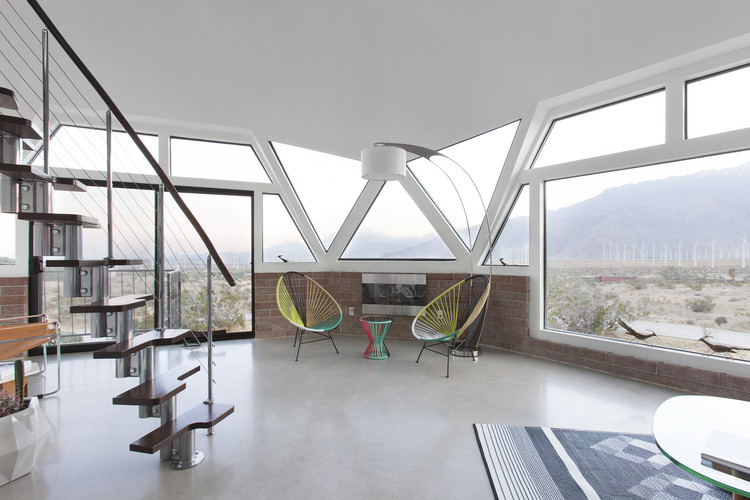 Text description provided by the architects. Escape it all at this fascinating vacation home rental in Palm Springs. Resurrected from neglect and disrepair by an LA-based architect this unique compound has been creatively restored with a stylish mid-century inspired aesthetic. Full of fun geometric structural patterns of the dome, the thoughtful attention to detail, and the mesmerizing desert views. Set within a spectacular five-acre property, this thoughtfully restored geodesic dome house sits on a hilltop with spectacular desert, mountain, Joshua Tree and Coachella valley views from virtually every angle. Its complete solitude interrupted only by the hypnotic wind turbines that lend an otherworldly beauty to the already dramatic desert landscape. One of the three major wind farms in California, the giant sentinel-like windmills stand silently harnessing the power of the wind from the San Giorgonio Pass, rhythmically turning throughout the day and flickering at night.

Rescued from neglect by LA-based architect Pavlina Williams, this vacation home rental is a labor of love that has been reimagined from its basic structural roots to a modern showplace with distinctive mid-century styling. The soaring twenty-six foot ceilings of the dome feature a spacious open plan living area with panoramic views from multifaceted windows and the first of the three bedrooms in the loft space above. Studded with skylights and the triangular facets of Buckminster Fuller’s ingenious geodesic design, the space is relaxing and dreamy. The ground floor master bedroom has a separate seating area and features amazing views of the Joshua Tree National Park Mountains and desert landscape while the third bedroom offers complete privacy with focused views of Mount San Jacinto. There is an office adjacent to the landscaped atrium and a large open kitchen and dining area well equipped for entertaining. Head out to the covered patio and dining area next to the atrium or sink into the spa and relax under the stars with the city lights of Palm Springs twinkling in the distance.

As a licensed architect and construction hobbyist in Los Angeles, Pavlina and Carter Williams are accustomed to finding the potential in long-neglected properties. The two spend their weekends renovating finds, and when they discovered a gem tucked away in the Coachella Valley that hadn't been occupied for nearly a decade, they decided to update it as an homage to mid-century modernist design. Originally built in 1956, the home has sweeping views of the desert and an eye-catching dome addition that the pair rightfully agreed was its greatest asset. But, it needed a lot of work. The couple spent a year ripping out carpet and vinyl linoleum and knocking down walls that blocked the desert sun from inside. Then, they gave the dome the finish it needed to really stand out: a puzzle of geometric windows. "Being here really calms you down and stimulates your creativity," Pavlina Williams said. And although the duo is already working on their next Palm Springs upgrade, she said that this reimagined address is still her favorite work to date.

Before the renovation, the home didn't showcase the desert scenery. Now that the property features 360 views, guests can enjoy the landscape, which includes the area's famed white windmills in the distance. Triangular and trapezoid-shaped windows are all custom-created from various brands, including Jeld-Wen and Milgard. The floors are polished concrete. To soften up the feel of the living room, they placed this rug from CB2 in the center. The metal and wood staircase is from Fontanot. The couple painted the walls an eggshell white from Sherwin Williams to accentuate the natural light. This also allowed them to decorate with playful colors.

When furnishing the home, the couple focused on finding mid-century modern pieces that were bright and cheerful, much like the space itself. For the kitchen, they purchased appliances from Sears, a faucet from LightInTheBox, and paired the pieces with Ikea furniture. The home was in rough shape when the Williams's bought it. By stripping the home down to its basics, like the study's brick walls, they were able to uncover the property's simple beauty. Although the home was built in the 1950s, the dome wasn't added until about two decades later. The outside garden, which features a variety of shapes, helps to unify the two eras of architecture. 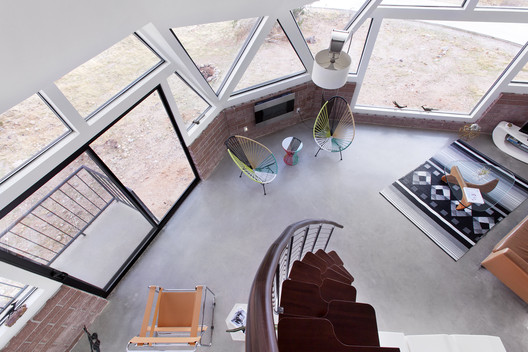 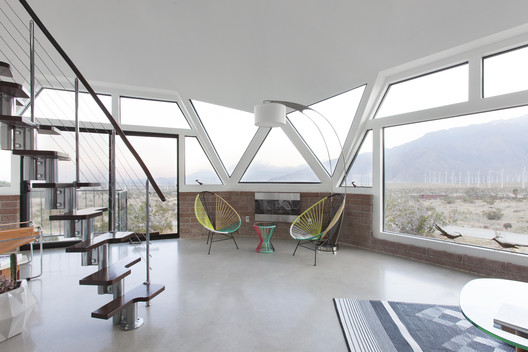