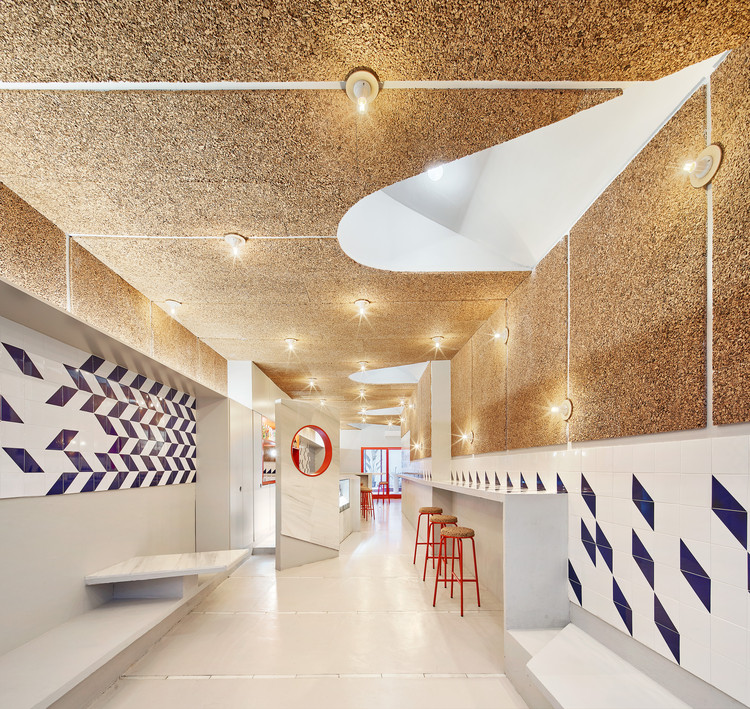 Text description provided by the architects. The premises are located in a building’s ground floor, in the Gracia neighbourhood in Barcelona. It has been catalogued with a level C of protection (Well of Urban Interest). As from the 90s, it has worked as a bar with a mixed licence. The interior, as it happens with the vast majority of ground floors from the 1900s in Barcelona, has the shape of an elongated tube, with a small patio at the back.

In order to reform the old establishment, the following criteria have been taken into account:

Restitution of the façade: in the original state, the entrance hole, with a height of 4.50m, was only covered halfway, with grates which belonged to an old smoke extraction, and a large opaque sign. The proposal eliminates these elements, going back to the original composition and dignifying the building.

Accessibility: the interior slopes are eliminated at the access, replacing them with a smooth slope, which is less than 4% and imperceptible. It goes from the entrance till the beginning of the bar.

Natural lighting: the restitution of the patrimonial façade, cutting out the original ceiling, duplicates the entrance of light from the access. At the back of the establishment, the closings of the old office are demolished and the distribution of the restrooms is modified to make two large openings which generate a new entrance of very necessary natural light.

Acoustic comfort: given the acoustic requirements of a public venue, the false ceiling and part of the sides have been covered with cork panels, a sound-absorbent material, so reverberation can be avoided and also to reduce transmission to the neighbours. The plastic qualities of the cork finish are used as the main decorative motif of the establishment.

Having completed these essential criteria, the project’s strategy consists of differentiating two sectors in one space. In the first place, the perimeter is projected, formed by the cork and tile coverings, and pavements and walls with a continuous covering. In the second place, a series of construction objects are built, with envelopes lined with marble tiles, scattered throughout the premises. Through its geometries, the uses are arranged:

Surrounding: as we have said beforehand, the false ceiling and the walls are lined with cork, an element which evokes fishing materials, making use of its cutting to generate stripes which will generate a rhythm throughout the local and where the light bulbs will be placed, as if they were floating. In this existent false ceiling, a series of holes are made to decongest the premises and to accentuate the rhythm towards the interior, looking for a sensation of natural zenithal lighting. Most of the walls have auxiliary work bars, lined with white/blue bevel tile and white tile; the different combinatory motifs end up generating abstract murals that are distributed throughout the establishment, and at the same time they evoke Andalusian arabesques. Finally, a continuous self-levelling pavement is related to the walls, giving a sense of abstraction to the whole.

Objects: two auxiliary tables, the folding screen, the bar-counter and the table. Each element, with its singularities, gives a different nature to each part of the bar, generating diverse atmospheres for customers who look for alternative ways of locating themselves. Tall stools are designed, and they relate the cork of the false ceiling to the rest of the establishment. Lastly, we opted for an exempt washbasin in the toilet hall, which contrasts with the green in the patio. As a whole, a series of elements that are part of the remains of the fictitious shipwreck of a large marble fishing boat. 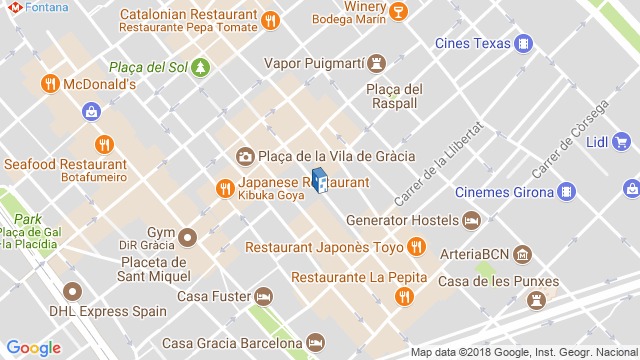