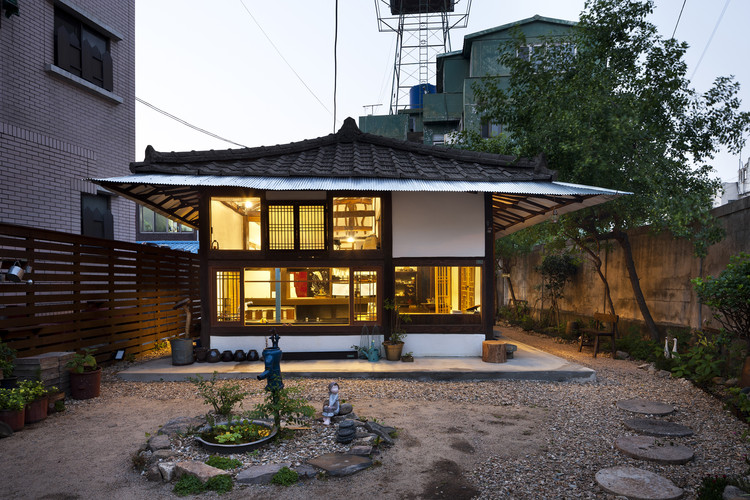 Text description provided by the architects. Lucia’s garden is located in the old downtown of Gong-Ju city. (Gong-Ju is one of the oldest historical city in Korea.) The house was originally built in 1964.: the first house was mainly built on the soil of unmade yard, and has two small rooms , a tiny kitchen, and a narrow attic. However, when it comes to the story how the first house of Lucia’s garden was built it gave us different look of the ruined old house.

50 years ago, there was a family man he was poor but always try to be a good husband and a father to his five loving children. He was very determined to own a house for his family but it was not easy for him. So, he decided to build a small house by himself. However, the small house was not just little for him, it was too big for him alone. It took over 3 years to complete a basic house of 33 square meter size. : He had to earn and save for a single nail. He had to stop the construction when it ran out its stocks. And then back again when he earned the stocks , and stop again.......After all he completed his dream house, not much longer he lived there. Because of his sudden death. He lived there for only 3 years.

Since he died, his wife and children never left there and look after the small house. After children had grown up and left home to a big city for working, yet his wife were still living in there. She loved a small flower garden where planted long way beside of the house wall. For her, the house was not just an empty nest but a house for love and belief. She was very faithful to go to the Cathedral nearby the house. People called her Stella which is her baptismal name. She lived in the house until she died. Since that there was no one left in the house. The house was abandoned for years. No one interested in a ruined empty house until an unexpected visitor walking through the house.

She seemed a middle aged women. Her name is Lucia. She was seeking to buy a house but hard to find what she really liked one. Meanwhile she found an alleyway that was too narrow to drive down. Almost instinctively she got off the car walking through the narrow alleyway ,and saw the abandoned house. The steel house gate that rusted and broken was hanging on the tilt. The pieces of the broken earthen pots and fallen bricks and blocks were everywhere. (in Korea, Traditionally, the home made soy sauce , soybean paste and red pepper paste have been naturally fermented over years in large earthen pots outdoors. It is not just a condiment but represents the history of a family.) At the south part of house wall , there were a broken refrigerator and worn out household goods dumped at the courtyard. However, she really liked the house. In terms of its location she thought it is very quiet. Particularly, when she saw the small flower garden where planted long way beside of the house wall, she made up her mind to buy it, ‘No need to think it over anymore!’

Not until that she did not know the house was Stella’s. Actually she knew Stella , not a close friend but they went to the same Cathedral. Now the small flower garden Stella loved has led to Lucia’s hands. The ruined house might have chosen the best landlady because she was the only one who saw the house ,not a ruined, as a treasure.

After hearing all the stories, we planned to mend the house like reknitting a thick sweater worn to a thread. First, we began to demolish it as a normal procedure for renovation but we speculated what to remove and what to remain, like saying remain is main, sadness become happiness and memories become histories , each meaning of the place regarded as a means of remodeling. As Lucia’s wish that remain all breathing of Stella’s trace, we replaced and reused torn down the old part of the house like the ship of Theseus. The wooden veranda that collapsed by corrosion has become an antique table and a vintage shelf. The closet that placed at the space in between two room as a partition has moved to the floor and become a dish cabinet. The broken earthen pots has become flower pots with the soil of unmade yard. The rusted steel house gate and the rough cement roof tiles have been remained at the original position. The transparent plastic awning has become the same shape of bright iron plate shading.

The house was situated on the long site ,south to north, faced to east, when you enter the house you can not see the front of the house ,only possible to see the side of the house. Hence we have torn down the wall and put a window bring the sun light into the house. And also it makes that looks like it as a main facade. Furthermore, we had to do something about the narrow and dark attic: we removed the ceiling and exposed the structure of rafter, in order to make it more specious and to bring more sun light. While we removed them we remained something old traces like window frames and patterns of glass kitchen door. Likewise we have attempted to remain the old traces as much as we could but exploited the modern convenience applied as a material component.

While the power of nature can be forever the human life can not be. I think it is not a matter of eternity but the acceptance of constant changings and movings. Thus, although the changing of Stella to Lucia it will be continued as long as the power of nature exist. That is why we named the house as Lucia’s garden: In Korean, soil, land, yard, garden and earth means all the same and represented as Mother Nature. We just looked into the small flower garden as the will of the house and it has led us to a way how architecture can be sustained over time.