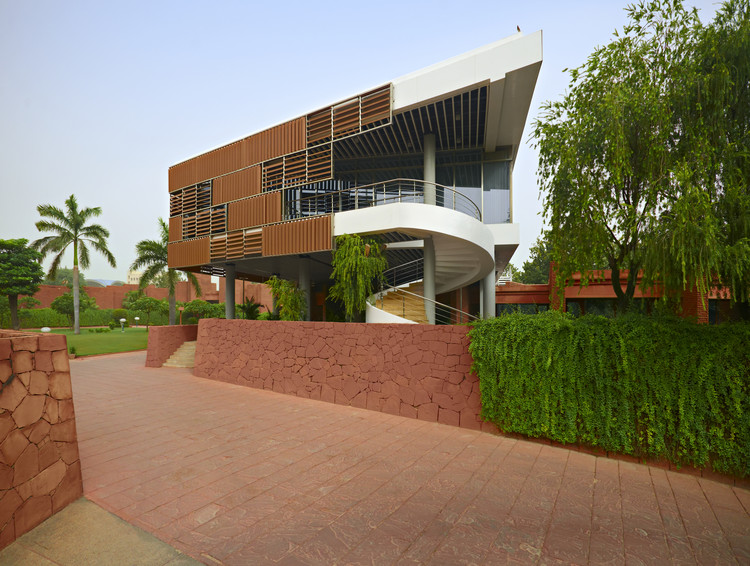 The characteristics of the existing building are the fan-shaped walls that are laid out as if they are spread over a lot, and the spaces between them are filled with deep shadows. It’s known as one of the most remarkable diplomatic buildings of Korea built anywhere in the world. Korean embassy selected the design of AA Studio for the extension of the annex building of the embassy(2013).

The preservation of the heritage buildings and a close relationship amongst the old and the new was the starting point of AA Studio’s proposal for the Annex Building at the embassy. The new building was conceived as an extension of the existing buildings. By establishing this relationship the harmony with the old was achieved delicately yet boldly. Chang-Hyun Kim, the principal architect of AA Studio, having already lived in India for nearly two decades drew upon his experiences in Korea and India to create a new vocabulary of Asian Contemporary Architecture.

The exterior of the building was conceived with glass to create a sense of openness, as well as harness the views of the garden and bring in natural daylight. The West and South facades which generally receive the harsh Indian Sun were further covered with the combination of Jalis(sunscreens) and Korean traditional window. The jali and the Korean Window was reinterpreted by applying modern metallic louvers over the building facade. Through the louver, it was possible to obtain the effect of reducing the heat of the open air outside the room by more than 10℃.

Considering the privacy of the employees of embassy inside the building, the louver was applied in a horizontal and a vertical direction in order to provide views but not compromise privacy. The exterior finishing pattern of the former embassy and the outer wall are summarized in a new pattern that can be encountered together. The building visible as a floating louver frame structure has been formed to express Korean traditional roof line.

The view of the floating building is galvanized by the spiral staircase visible on the front façade. The Building appears as being precariously supported by the dramatic spiral staircase. The main circulation of the building rises and connects the basement, ground and the upper floor and follows the indoor courtyard. The circulation also becomes the light well in the building. Being surrounded by daylight all around the building does not use any artificial lighting during the daytime. The sunlight cast the shadow of louver into the indoor space giving an ethereal feel to the light inside the new building.

The space below the floating building is provided for the employees of the embassy to meet freely, interact and discuss, hold events and meetings or just enjoy a coffee break outside in the shade as and when the weather permits all while enjoying the beautiful view of the garden by their side. 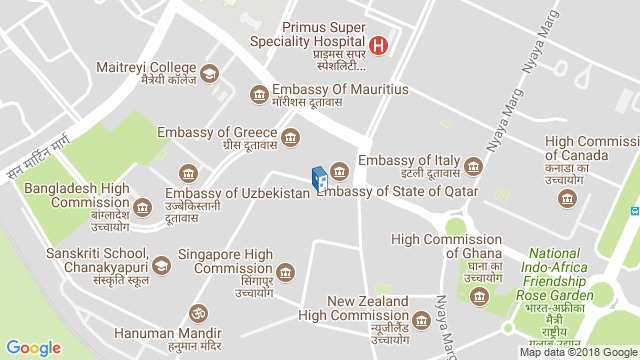