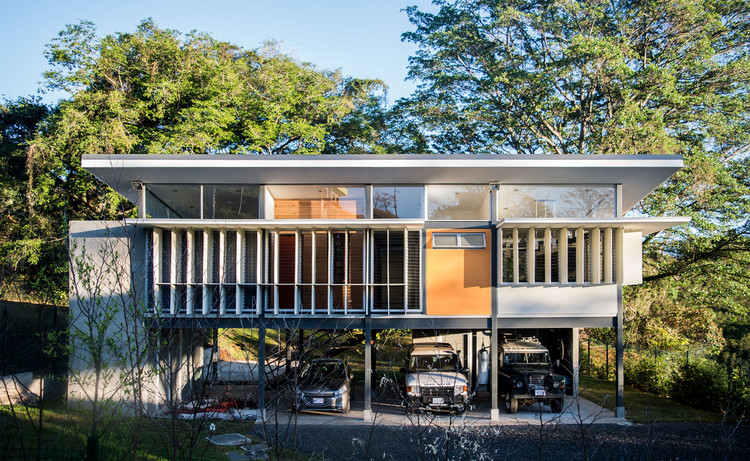 Text description provided by the architects. One of the main goals of our architectural firm is to provide clients with an integrated approach to sustainable building concepts. The VV Residence is no exception as it generates connections with the surrounding landscapes and incorporates passive design strategies to create an optimal, high-performance hygrothermal home.

The residence is located in Naranjo, a small, world-class coffee-producing town near the western side of San Jose, Costa Rica. Although the project is located in a residential condominium, it is surrounded by nature, offering northern vistas of three volcanoes that border panoramic views of the Central Valley.

The programmatic approach taken when designing the residence was primarily based on the homeowner’s need to prioritize the functionality of the living spaces. The one-bedroom residence is comprised of integrated social areas, including an office space and an open kitchen, with the utility areas playing an important, yet secondary role in the design. In order to fully enjoy the existing views, preliminary decisions for the design included locating the living areas on the second floor, leaving utility areas at the lower level, with a staircase acting as a connection between both spaces.

After defining the programmatic layout of the residence, an exhaustive study of climatic factors and conditions of the area was carried out. The weather of Naranjo is characterized by a combination of high temperatures (close to 30˚C / 80˚F) with high percentages of relative humidity (up to 80% or more), which generates a sensation of humid heat. Such adverse climate conditions are heightened when combining the homeowner’s physical activity and metabolic equivalent (met), as well as the increased effect of clothing (clo). This consequently reduces the comfort zone to a short period during the final hours of the day.

The study established the need for ventilation and shade in order to compensate thermal sensation. For this reason, horizontal and vertical sunblinds are designed using solar geometry based on the orientation of the residence, which has a longitudinal axis that inclines 16˚ from the east-west axis. Sunblinds prevent thermal gain inside the spaces due to direct solar radiation, avoiding excessive thermal load during the afternoon when temperatures reach their highest levels. For this reason, the east facade is protected from 6 a.m. in the dry season and during the rest of the year from 9 a.m. Sunblinds frame the glass louver windows; helping to keep the rain out while maximizing the views of the surrounding landscape during rainy season.

In order to avoid thermal gain, the north and south-facing facades are protected throughout the year from direct solar radiation from 6 a.m. As a strategy to reduce thermal conductivity transmission, utility areas are located to the west of the residence, allowing these to act as a heat barrier to limit temperatures in the main bedroom during peak use. The installation of under-roof insulation also reduces the maximum solar heat gain by reflecting solar radiation.

Well-ventilated spaces such as the entrance staircase play an essential role in passive cooling. The shade generated by its double height provides a buffer zone to lower air temperature before flowing into the sleeping quarters. Similarly, pronounced overhangs are used to provide protection from the sunlight and rainfall during the rainy season.

The glass louver windows allow room temperatures to be easily adjusted by controlling the amount of airflow. Helping to combat the specific climatic conditions of the residence, the most-used living spaces are prioritized for cross ventilation with airflow directed towards thermally sensitive parts of the body.

The residence includes a variety of renewable energy methods to save on utility bills and energy consumption. A rainwater harvesting system provides water for home sanitation and a solar hot water heater is incorporated into the residence’s plumbing system. The landscape design preserves existing native species and green areas, aiding both the reduction of water use for irrigation and lowering temperatures with the surrounding vegetation.

Even though concrete generates 5% of CO2 emissions worldwide, the use of exposed concrete façades is a sustainable choice due to its durability and low maintenance cost. In addition its simple recycle process, concrete has a high thermal inertia, and acts as an excellent acoustic insulator.

Due to its durability and malleable nature, a steel frame structure was utilized. Although steel represents 3% of CO2 emissions worldwide, it is a 100% recyclable material with a long and useful lifespan.

The steel structure was cut off-site and installed at the location, reducing transport costs, labor time as well as limiting negative environmental impacts generated during the construction process.

Through the incorporation of various passive design strategies, the VV Residence reaches a high performance level in reducing its environmental impact and energy use during its life cycle.

The project achieves a high hygrothermal comfort rating while taking full advantage of its surrounding environment to create optimal living spaces without sacrificing connections with nature and the surrounding landscape. 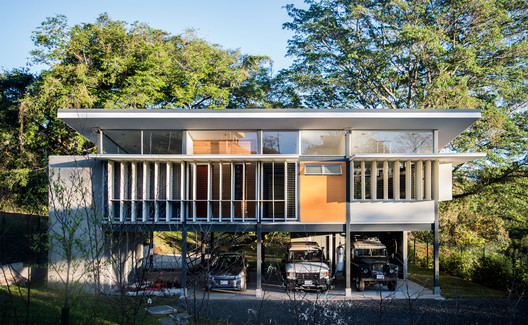