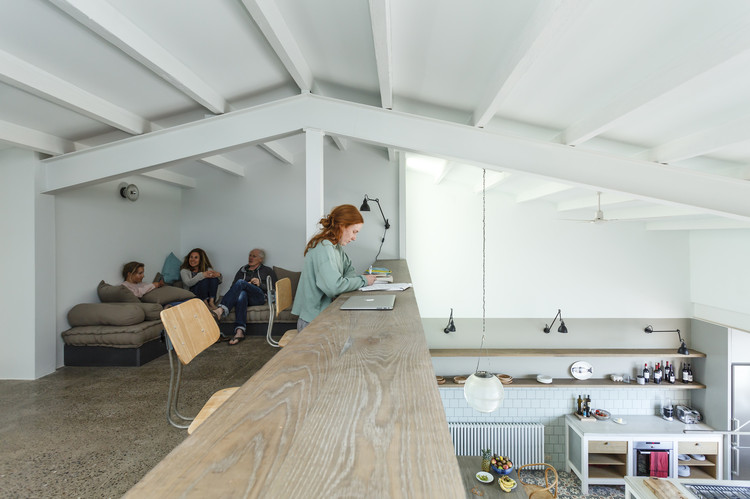 Text description provided by the architects. Next to the Mediterranean Sea runs the historic Camí de Ronda, a route that connects the towns and beaches of the Costa Brava. In a stop of the road and in an unbeatable location, we find this house between party walls that is part of a protected area.

The house, staggered on the rock, prolongs the journey inside four floors, connecting directly with the sea through its private pier.

The owner was looking for a simple and comfortable house that would allow independent uses in the secondary rooms and, at the same time, common and related uses in the main space open to the largest terrace of the house. A readjustment of the functional program was also necessary, turning part of the shady terrace on the second floor into a new room and adding bathrooms on the second and third floors.

The entire existing building has been intervened; restoring facades, roofs and terraces. The general volume has been respected and, in facades, the traditional composition, aesthetics and chromatism, characteristic of the Mediterranean coast, has been maintained.

The interior layout has been modified, as well as openings and skylight has been enlarged to enhance the views, the interior crossed visuals and the capture of natural light in all spaces.

The carpentry of the facade to the sea allows a total opening, diluting boundaries between interior and exterior. This connection allows to unite the common spaces, transforming the terrace into an extension of the living room to the outside.

Climatically only a system of ceiling fans has been installed to complement the natural cross ventilation through facades and skylights. Outside, the blinds and the pergola avoid excess solar radiation inside the house, allowing optimal comfort in summer.

The original elements of the house, such as hydraulic pavements, carpentry and wooden beams, have been recovered to preserve the traditional character of the construction. These enter into dialogue with the new elements of wood, concrete, steel and ceramics that, although contemporary, maintain the values of sobriety and austerity of the original construction.

The use and design of custom furniture is especially important in the project. It provides a functional value to each room and works as an active element in the formation of spaces, working as a dividing element or catalyst of natural light into interior spaces.

The result of the rehabilitation is a house that functionally responds to contemporary schemes but that makes clear its traditional and Mediterranean origin, where natural lighting and visuals on the excellent location are the main protagonists that make this a privileged house.