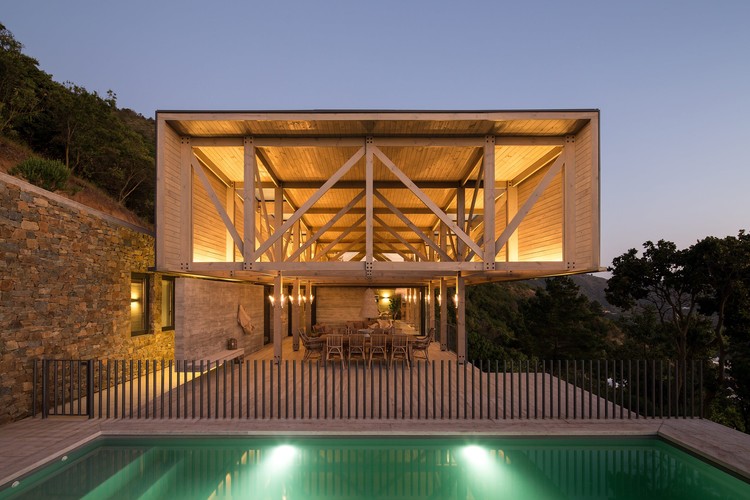 Text description provided by the architects. The project is located in front of Zapallar bay, 169 km from Santiago de Chile in the region of Valparaiso. An isolated house in the forest at 450 m above the sea level, on the southern slope of the hill where El Boldo Park, a sclerophylls’ forest, is located. The thick stone walls modify the extreme topography in habitable levels, achieving two horizontal planes, in between the forest, which gives virtue to the territory and roots the architecture in an intimate relationship with its environment and the forest that surrounds it. Its complex variety of materials is balanced and related accepting each quality and its contrasts, managing to moderate its conditions, matching the appearance between concrete, wood, stone, and marble, all noble and long-lived materials, which contrast its rustic and warm persistence, with glass and steel roof, materials that give a contemporary look, an innovative and mixed face to the outside.

The internal space is divided into two floors, a level of access and main use, with a parking area, and all the service areas gathered, communicated with the living spaces, such as living room, dining room and terrace, which are connected in a fluid way. The level which goes from the main room to the pool space of free movement, that provides habitability and comfort to the owners of the house, a couple of the third age, who asked as a fundamental requirement, to provide this continuous transit without slopes, due to their age. Topping the end of the housing circuit there is the living room, which conquers an almost complete transparency with the exterior, in an intimate relationship with the hill, its vegetation and the view to the beach.

The horizontal composition of the house is divided between two realities that contrast their characteristics; A half-buried body of stone that emerges from the topography, it configures the access as an ancestral cave, which highlights the roughness of the materials and is organically covered with a vegetal roof, that gives continuity to the hill over the service area, hiding part of the size and controlling its presence as an upper facade to the view of the park's paths behind it. Separated by a sequence of light patios and glazed ceilings, there is the living space, warm barn-style wooden pavilion and a shell-like roof, like an inverted wooden boat that leans according to the use and the greatness of the space accompanying the sloping terrain in its same cutting graduality.

Interior with external vocation, light in its essence and wide in its use relationships, which reward the permanence in virtue of the distant.

The house is oriented with the predominant views of the bay, facing away from the orientation of the sun, which forces us to receive natural light in a zenith way, through skylights that capture and transmit natural light to the interior and thus provide warmth to the spaces. The kitchen is illuminated by gratifying overhead light from the green roof, which covers all the independent service zone too. 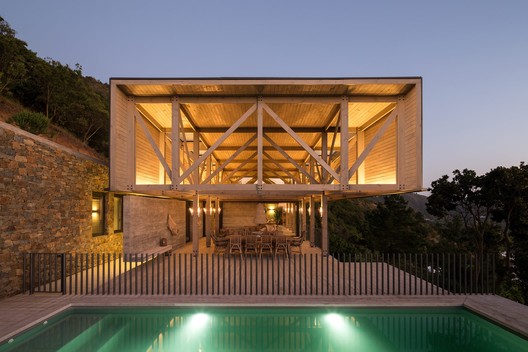