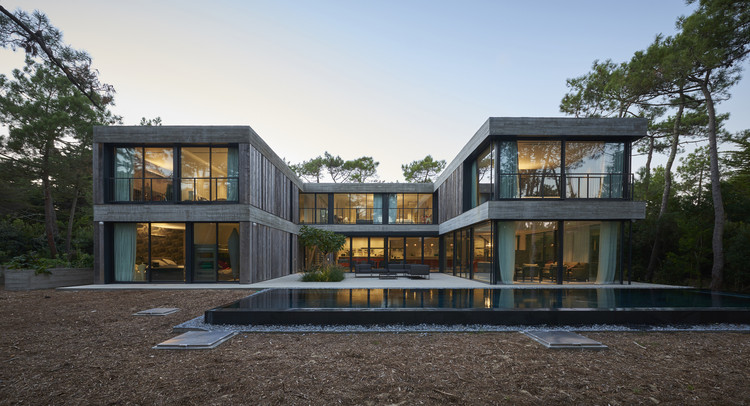 Text description provided by the architects. With an impressive architectural program, this house aims to split the volumes, sheltering the functions of such house to reduce their impact and to organize them around a protected terrace, opening to the south on the swimming pool and on a pine forest.

The facade, overlooking the street, is made of wood and concrete opaque volumes, which deteriorates laterally.

It welcomes the visitor almost at the middle of the space and leads him through a “fault” between closed blocks until the heart of the house, its terrace.

This facade overlooking the street, rather closed-shaped, is designed to protect children’s rooms from strong sun coming from west as well as a riddle to passersby and reveals a rupture with the consensual habit of the neighborhood to build palaces disguised as huts.

From the rooms on the ground floor, the house set up transparencies views between interior and exterior spaces. All rooms and flows of the floor above frame the plants of the garden and of the heart of the plot.