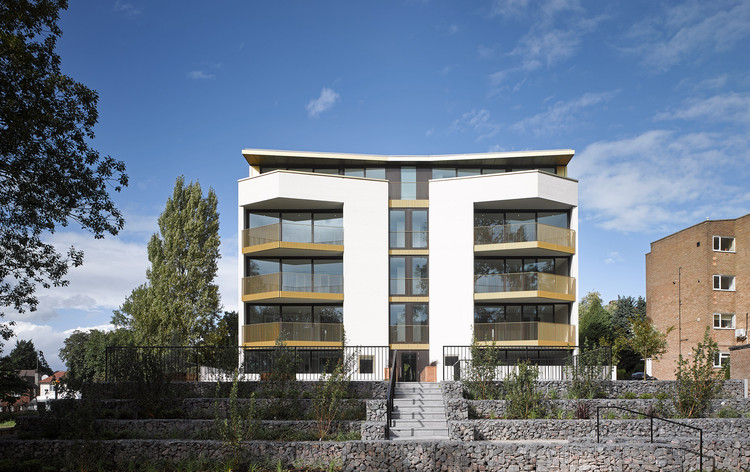 Text description provided by the architects. On the Haringey Borough boundary, at the northern extent of the Highgate Conservation Area, local developers saw the potential to replace a pair of semi-detached houses with a larger residential building. Daykin Marshall Studio carefully developed proposals to maximise the land value whilst enhancing the street and local environment.

Unlike most cities, London has never really embraced apartment buildings. Stacks of flats seem too stark a contrast to amiable rows of townhouses, but one exception might be the ‘Mansion Block’. Between the rush of the A1 leaving London and the quiet idyll of Highgate golf course Daykin Marshall Studio have updated this typology of re ned apartment dwelling.

A strong street facade of four storeys responds to the red brick bay windows of mansion blocks on the opposite side of the street. Patterned Flemish bond brickwork, making use of the traditional English technique of including ‘burnt’ header bricks, overlays the sculptural ‘cranked’ form. These angled reinterpretations of bay windows enliven the north-facing road frontage, allow interesting oblique views, and admit east and west light to bedroom spaces. Acoustic double-glazing reduces road noise in these rooms and a background MVHR ventilation system supplies fresh air without inhabitants having to open windows.

A central recess in the facade holds the main entrance and its protective canopy with circulation spaces expressed above. The simple and ef cient tenement plan arranges a spacious single-level apartment either side of the circulation at each level. A dramatic penthouse then breaks the mould and spans the entire fth oor. This level is set-back to reduce the mass of the building from the street and create a series of terraces around the best apartment. It is clad in anodised aluminium panels to form a special ‘crown’ at the top of the structure that facets in response to the brickwork below. The light-gold colour is designed to enhance and bring warmth to reflected light, even on London’s overcast days.

Living spaces are located on the south side of the building to bene t from magnificent views over the golf course parkland. The south facade is finished in white brick in contrast to the street frontage. This reflects the brighter aspect enjoyed at the rear of the building and echoes the white concrete balconies which are the prominent feature on adjacent 1930s ‘liner’ housing blocks. Each apartment has a large balcony or terrace that is recessed to provide significant solar shading and reduce over-heating in summer. Filigree gold-coloured balustrades ‘stitch’ in and out of the south facade. They ‘weave’ the fabric of the penthouse into the white brickwork and add richness to each level. This facade is also angled, but more subtly, for interesting visual relief and to maximise the floor area of the balconies.

From the main street entrance one can see and walk straight through to the planted gardens at the rear. Ground floor apartments have private gardens either side of this route which opens out into communal gardens. By careful use of the sloping site, extensive covered parking is hidden from view beneath these gardens. Beyond the car park the landscape steps down in a series of terraces lined with stone gabion walls. These are planted and designed to naturalise over time to draw the greenery towards the building.

The new ‘Mansion Block’ maximises land use whilst maintaining the scale and character of the street; density is added to make a positive contribution. On this basis Daykin Marshall Studio negotiated with powerful local conservation bodies to garner support before receiving unanimous approval from Haringey’s Planning Committee. Careful detailing and close collaboration with sub-contractors then enabled the crisp junctions and interfaces to be constructed on a tight Design & Build procurement route. The architects now seek to use the skills and lessons learnt on this project to develop other housing projects across London. Daykin Marshall Studio believe that housing quality at all economic levels can be improved by meaningful design and careful construction. 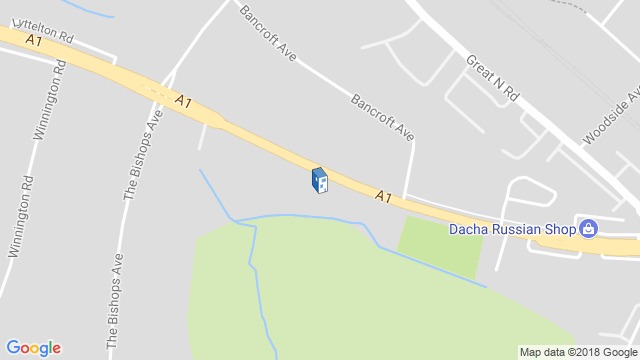 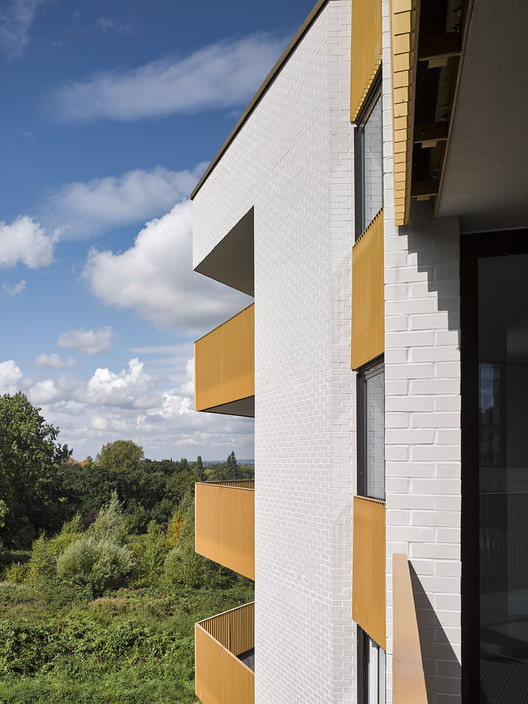