Work has begun on the dismantling of the facade of Michael Graves’ iconic Portland Building, part of a $195 million project that could see the building lose its inclusion on the National Register of Historic Places. 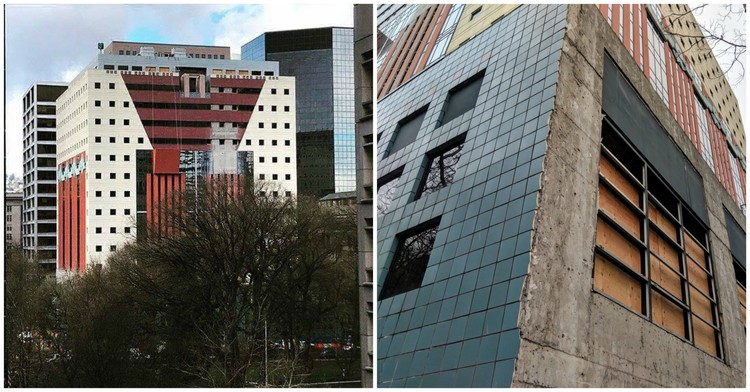 Often recognized as the first built example of civic-scale Postmodern architecture, the Portland Building was completed in 1982 for the relatively low cost of $28.9 million (including furnishings), instantly putting Portland on the map as a city of progressive design ideals. Housing the city’s municipal offices, the building was most notable for its graphic painted concrete and tile facade, which rescaled and flattened elements of classical architectural.

But over the years, seismic deficiencies and water intrusions issues have plagued the structure, requiring constant maintenance, including a large renovation to fix cracks in the lobby and food court just 8 years after its opening.

These issues led the city to investigate how to best improve the site in 2014 – considering options as drastic as demolition. But in 2015, after fightback from preservationists as well as Michael Graves himself, the Portland City Council settled on a reconstruction plan that aims to preserve the building’s appearance, while replacing original materials with contemporary updates.

Other changes include the partial infilling of street level loggias with aluminum storefront systems and the repurposing of the underground parking garage into a fitness center and bicycle parking.

International architectural preservation organization Docomomo responded to these proposed changes, noting that the project may set an unfortunate precedent for the treatment of future architecturally significant buildings:

“The preservation approach for this building is precedent setting, and unfortunately the contempt for the aesthetics of post modernism (or perhaps the misunderstanding of post modernism entirely) clearly drove the "preservation" approach,” said Docomomo in a news post. “While City Council's vote to approve the project was expected, the Historic Landmarks Commission's initial conditional approval of the project was a blow to historic preservation efforts for modern and post-modern resources, offering a truly troubling perspective that even buildings that have reached the higher bar of meeting National Register criteria before the age of 50 can be treated as less important than buildings of stone or terra cotta. The historic status of the iconic Post-Modern building is threatened due to the exterior modifications (the entire façade will be covered in metal paneling).”

Even more troubling, the National Park Service has said that the exterior modifications will “more than likely remove the building from the National Register,” after achieving status in 2011.

Learn more about the ongoing reconstruction, here, and at Docomomo Oregon, here.

News via Docomomo, Next Portland.

The Portland Building, by architect and product designer Michael Graves, is considered the first major built work of Postmodernist architecture. The design, which displays numerous symbolic elements on its monumental facades, stands in purposeful contrast to the functional Modernist architecture that was dominant at the time.