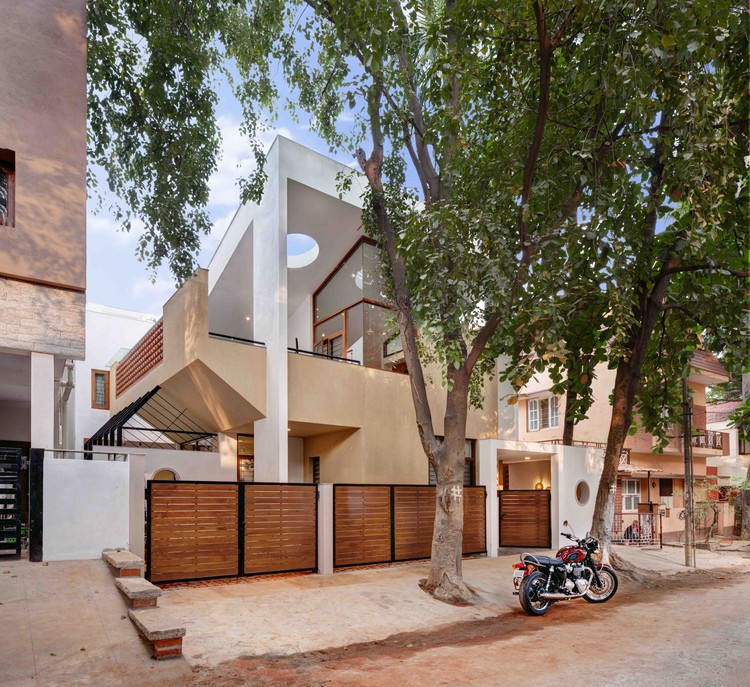 Text description provided by the architects. Situated in Kormangala, one of Bangalore’s premium residential areas, House Sampada sits in an urban context, with houses built very close to each other. The site is a 60’ X 40’ plot on a street completely shaded by trees.

The idea behind the house stems from its immediate context of a residential urban scape. With neighbors closing in on all sides, the house turns within for repose. Light is borrowed through the central courtyard and a series of playful but well placed skylights. The form on the first floor modulates itself to respond to the greenery on the house front creating an opposing extroverted and uninhibited character when compared to the ground floor.

A design completely governed by site context and existing elements, House Sampada is an architectural project that packs in many different spatial experiences in a small site area. With varied volumes and a strong relation between the built and the unbuilt in the form of open terraces and courtyards, the house manages to enhance one’s perception of space.

The main foyer encompasses a double height space with circular skylights, a common element seen throughout the design that harnesses ample sunlight, given the context. Private spaces are pushed away from the front facade, which showcases a prominent portal and terrace, opening out into the embrace of the greenery, thus rendering the first floor outward in character as opposed to the more introverted ground floor.

Concrete was used creatively to construct various gestures in the house. Various planes fold around the house to create the spaces of different natures. I large picture window frames the tree outside.

A brick screen with seating and planters on the first floor terrace acts both as a design element as well as a screen to ensure maximum privacy from neighbors. A strong language of the open spaces intertwined with the built area in terms of the street, parking, courtyard and open terrace helps in the house portraying itself in a language of its own.