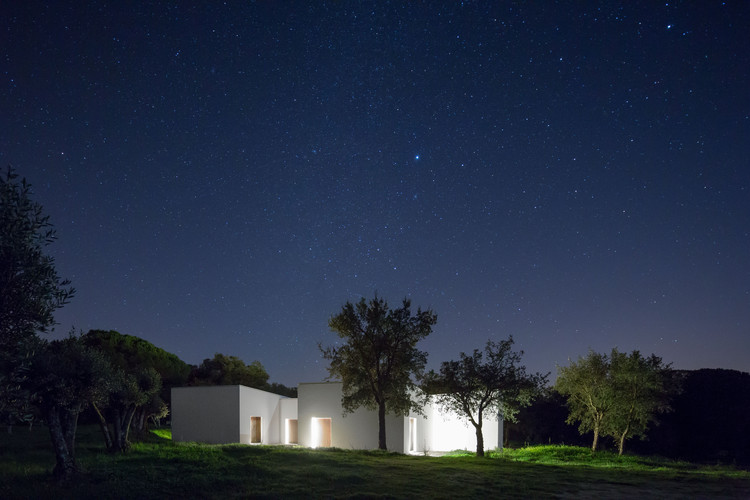 Text description provided by the architects. The house is located on a large field of mature cork oaks and stone pines in Grandola, Alentejo, near the Atlantic coast. Typologically, it is inspired by the Portuguese rural settlements known as “montes” which were usually located in dominant places in the landscape and formed by clusters of volumes informally positioned around a courtyard.  In like manner, the concept for this house spring from the idea of a central patio, which is the main source of light and shade.

Around and against this cut-off space, adjoining volumes aggregate the more private or servicing functions of the house —bedrooms, toilets, kitchen, pantry and storage, whereas the interstitial spaces between the volumes generate the social areas, namely, the living- and dining- rooms and the study.

In that regard, the house works in a dialogue between opposites: on the one hand, the aggregate volumes are thick and enclosed whitewashed cells with few openings that suggest privacy and seclusion; on the other, the common areas are organic and visually linked spaces free-flowing through the serenity of the internal glass patio.

The latter offers crisscrossing views into the surrounding landscape of oak fields; a contemplative frame that, once again, creates an emphatic contrast with the tectonic presence of the white blocks.  The seeming massiveness obtained as the first impression is ultimately dismissed, once the large sliding windows vanish into the walls and release an unexpected transparency across the whole.