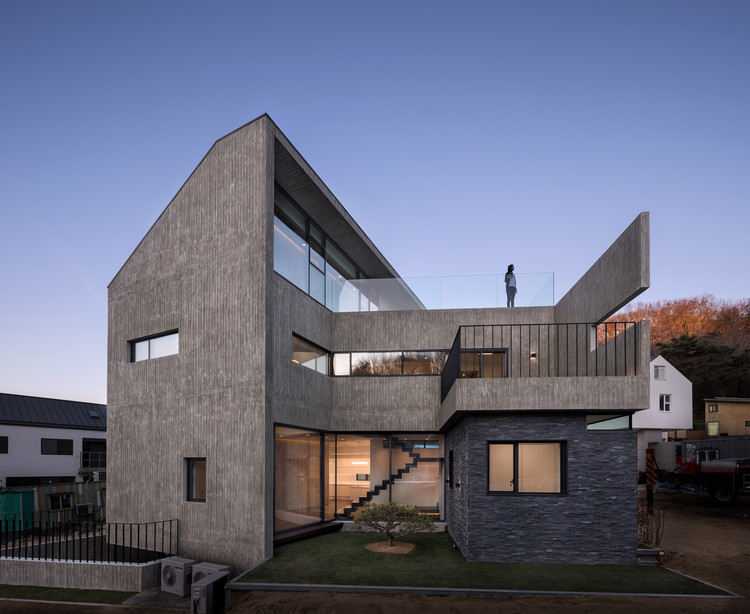 Text description provided by the architects. SIYEONJAE is a house which has a visual and spatial connectivity with the Hanok Village and nature being a backdrop of the house.

Eunpyeong Hanok Village is residential area where a Hanok residential complex is coexisted with detached housing complex. Surrounded by Mt. Bukhan mountain hikers often visit the area weekdays and weekends, and also visitors who with to see the Hanok village exist.

The shape of the area is fan and square. Since a road is not far from the house, it does not ensure private life by eyes from outside. Also, as three generations are living in the single house the project was needed to have independence.

Considering securement independence of interior space and visual connectivity the site with landscape westside, the mass was separated. Separated masses were filled with programs. In order to secure residential independence of two separated masses from outside, another mass was put. This mass acts as a pathway linking between other two masses. The house has a general residential ‘ㄷ’-shape of Hanok, and the mass acting as a wall has a hidden courtyard being visually connected with nature. And minimized openings to outside and an opening from the courtyard secure independence.

Mt. Bukhan which is a backdrop of the house and the shape of the sky that the low skyline makes are symbolic presence enchanting visitors.

By including borrowed scenery that is one of the traditional landscaping spatial elements, contrasting elements was added in terms of seeing the backdrop of the house.

Psychological change via visual and spatial contrast creates a sensation. The shape of the courtyard from a living room through the pathway where eyes from outside are blocked,

A roof garden relating to an attic which can be seen through a narrow staircase that is obstructed by the attic, the sky from a sunken garden at basement made by a mass void, and various types of openings when you move vertically and horizontally inspire you like looking at paintings in the various forms in an art museum.

The shape of the house is simple, ‘ㄷ’-shape. Pine-boardpattern exposed concrete which is the main material and matches the purity and honesty of the nature is representation of the magnificence of the nature and the vertical shape of the mountain by arranging the pattern vertically.And stone panels overcame the limitation of exposed concrete which makes the program boring and was used as a symbolic material of a program for a guest house. 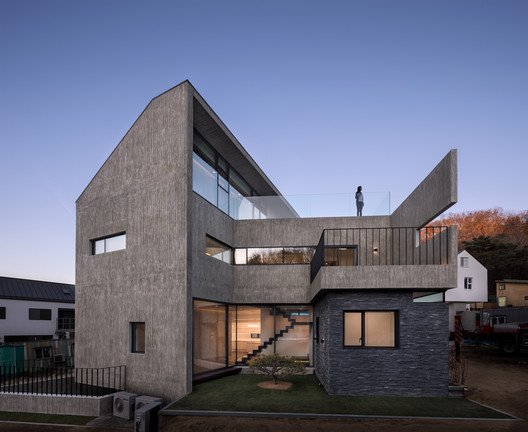