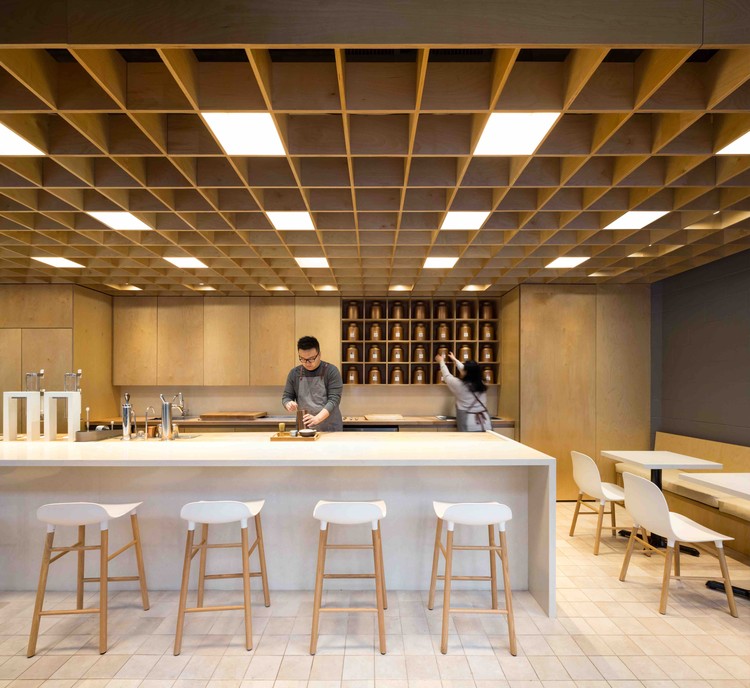 Text description provided by the architects. Cha Le Merchant Teahouse provides a modernist interpretation to the traditional Chinese tea ritual “Cha dao”. The intervention, designed by Leckie studio, seeks to consolidate a place to celebrate the ritual of tea-taking with a retail space where to learn more about the tradition and culture behind this millenarian drink.

It is a place to share knowledge and delight in the culture of tea and to learn about the process that goes behind the highly elaborated creation of tea - from growing the plants, to the curating, mixing, and blending. “When we spoke to the client about the reference points and ideas for the project, we proposed that we would draw inspiration from traditional Chinese apothecaries, and create a modern interpretation of a medicinal and spiritual place” explains Michael Leckie, Founder of Leckie Studio.

Materiality is central to the tea ceremony – beyond the sensual qualities of the tea, the interplay between natural elements in the space and objects of the ceremony equally informs the experience. The ceremony of exchange, and the concentration of awareness towards posture and gestures is articulated through simple objects. The senses are heightened by focusing on a single, humble material - plywood - and transforming it through a carefully considered and rigorous approach to detailing.

The sculptural mass and quality of the 'tea bar' creates and shapes the space around it. The architects found inspiration in the modernist plywood sculptures of Donald Judd, in which the material is elevated through an attention to minimal assembly connections and geometric proportion. Cha Le Teahouse makes use of a restrained quantity and monochromatic tonal qualities in the materials used. Humble archetypical materials forged into sleek, linear forms acknowledge the project’s rationalistic aesthetic while expressing a fresh interpretation of an ‘apothecary’ through the creation of a myriad of small shelving compartments

Whereas the ordering structure of the space may be described as rigid and orthogonal, the architect intentionally softened perceptual hard edges by choosing a warm, light palette that adds a sophisticated quality to the overall reading of the space. The teahouse adopts a harmonic and subdued sense of lighting throughout the space. The specified panel lights are coordinated to integrate into the architectural grid, delivering a softened light to the space and establishing a harmonic grid of voids that optically multiply the space. Embedded within the grid, the light hovers in a mysterious manner, blurring over the crisp lines of the entire volume. Natural light floods into the space through the shop-front, connecting the teahouse to the street-level patio. 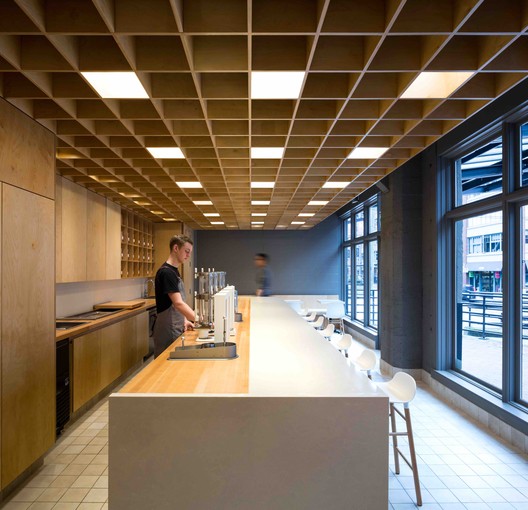