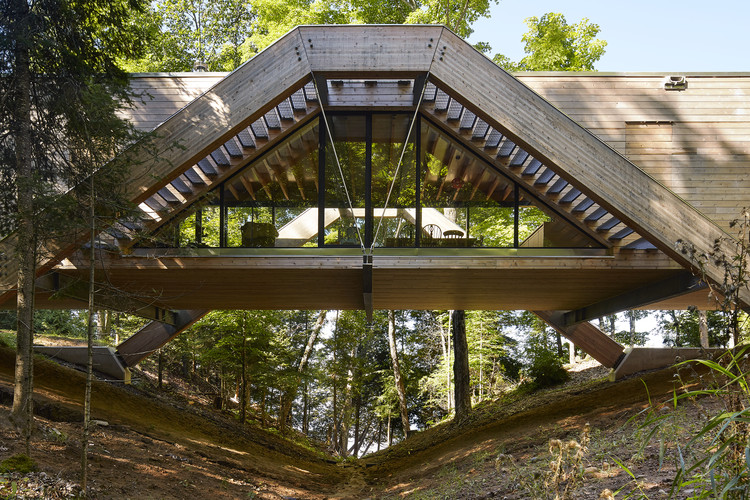 The Bridge House is located two hours north of the city of Toronto, on the shores of Mary Lake in Port Sydney, Ontario.

Placed over a ravine, between two large maple trees, the volume has a minimal impact on the site. It sits across the steepest part of the slope, drawing a 38-metre-long horizontal line that acts as a counterpoint to the landscape. This simple gesture celebrates the experience of the place, not only as one walks through the house, over and across the ravine, but also when heading down to the waterfront, underneath the house, as one would cross a portico that heightens the monumental scale of the landscape.

The house has two main facades. One faces the lake, acting as a sort of balcony that opens up towards the landscape, 6 metres above the ravine, placing the user at the height of the tree canopy. The other faces the forest and has a large opening which follows the form of the structure, mirroring the natural outline of the ravine.

The house hangs from an inverted V–shaped glulam structure that also supports the exterior stairs, connecting the interior social area with the roof deck. The ensemble produces a sense of lightness that frames the landscape from the interior, allowing the exterior to cross through the house.

A carefully crafted wooden finish, using only local woods, produces a contrast that resonates with the surrounding landscape. The exterior is clad in unstained cedar siding that runs horizontally, emphasizing the directionality of the volume on the site. The interior is clad in large panels of maple plywood, acting as a backdrop or projection screen to the subtle movements of nature. Here, the play of light and shadow created by the movement of the trees is complemented by the lapping sound of small waves on the beach. 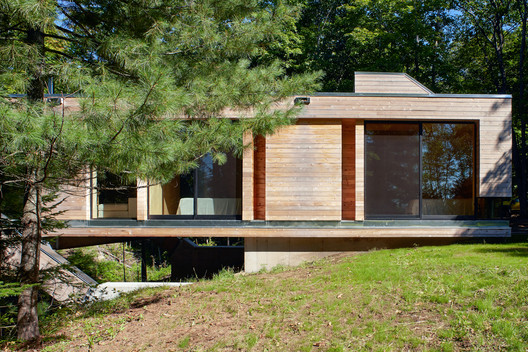 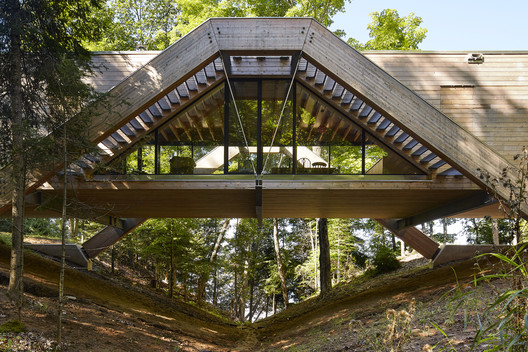