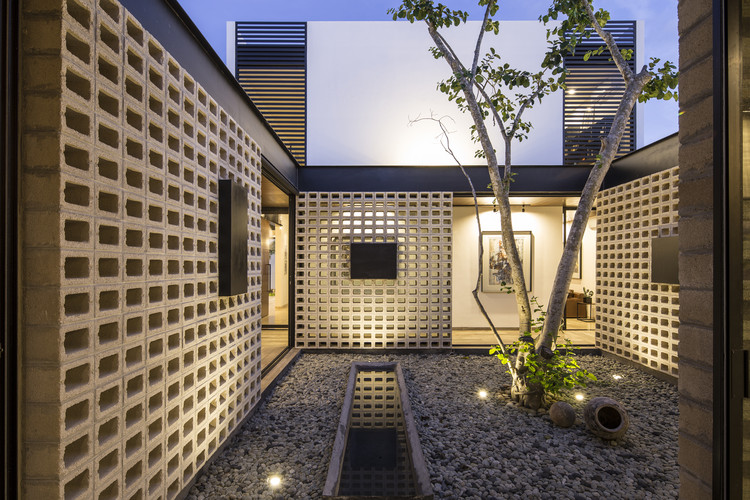 "Un Patio" is a single-family housing project, located north of the city of Mérida in the state of Yucatán, on a rectangular plot of approximately 24 x 39 m, oriented east-west.

The project is planned for a family where coexistence with art is fundamental, a central space is conceptualized, where the art, the user and the natural elements converge daily, resulting in a quadrangle containing a concentric central courtyard , which responds to a set of intersected    volumes.

The main volume, a square of 12 x 12 m consists of a sequence of loose volumes inside, which contains the private areas of the project, protruding from the concentric arrangement, is located a second volume at double height of 9 x 9 m intersecting the quadrangle containing the social areas.

The intersection between the volumes is marked by the use of different materials, in the first, the exterior walls, interiors and ceilings are completely covered with a mixture of concrete and chukum water (tree endemic to the region), characteristic finish of the zone, of null maintenance and strong Yucatecan identity, this being a highly sustainable material. As a counterpart to the second volume, with a smaller dimension and greater height, it is covered with a white finish, emphasizing the general volume, in this one is the living room, the dining room, a study and the double height terrace contained within the margin of a steel beam on which rests a concrete celosia that gives language and identity to the different volumes.

The central courtyard expresses the relationship between the interior and exterior space, this is drawn from an aspen inscribed in the ground, becoming the heart of the project and conceived as a concentric vestibular space, where the routes are accompanied by art, inputs of natural light and ventilation, through the use of concrete block celosias and glass windows that generate a space for contemplation and whose atmosphere changes with respect to solar incidence, granting control of light, humidity and ventilation for the preservation suitable for paintings and sculptures belonging to the collection of the clients. 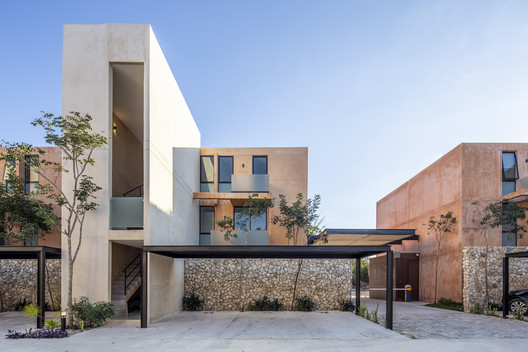