Save
House Frances / THOSE Architects 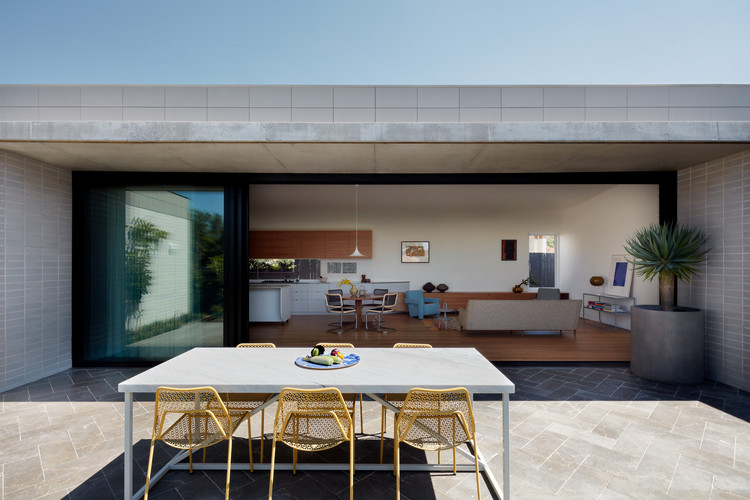 Text description provided by the architects. Traditionally, regardless of orientation the Australian suburban block is longer than it is wide. Typically, dwellings are built to the side boundary setback in order to maximise the floor plate along its length. The result is often a feeble connection to the rear yard rendering it the bastion of the weekend bbq and resulting in poor solar access, inefficient circulation and suffering from a lack of natural ventilation. Further, in the absence of a panoramic view, as is the case with this house, the result can leave one feeling walled in, constrained and disconnected.

The architectural parti for this new dwelling in Freshwater, Sydney by THOSE Architects is primarily to consider the relationships between the fundamental components of a dwelling to each other and to the broader context of the site.

THOSE director Ben Mitchell says of the project “We think of a house as a series of locations rather than a series of rooms. On any site, no matter how unremarkable, small or constrained there are opportunities for place making. For example, identifying the best location for a sunny living room or an opportunity for a private bedroom with an intimate courtyard view. As architects we are always striving to make a meaningful connection to place and this is just as relevant when considering a domestic dwelling as it is to a large scale public building.”

“Given the street frontage faces west, the best strategy here was to close the house off from the street, the harsh winter winds and strong summer sun and arrange the plan around a central north facing courtyard. Primary living spaces spill onto this courtyard affording it excellent access to daylight and natural ventilation. We then work with views into, out of and around the site, heightening them by restricting access to them visually, enhancing the experience as you move through the home. Every room offers a unique glimpse of the garden, or has access to it, creating a rhythm and sense of connection.’ says Those Director Simon Addinall of the project.

The dwelling is extremely efficient in its use of space, circulation and energy consumption. At slightly over 200 sq metres, the house demonstrates that luxury lies not in lavish size but in the relationships between spaces both internally and externally. “The house demonstrates you can live well irrespective of the size of the house. It’s about being efficient and considered with the space, rather than seeking size for its own sake. We consider the entire site to form part of the footprint of this house, it is in affect a 600sqm collective series of indoor and outdoor spaces’, says Simon.

In plan the dwelling comprises three parts: a central living and dining space bookended by private quarters, one end for the residents, the other for guests. These are afforded visual and physical access to private courtyards and gardens in varying configurations to create borderless relationships and facilitate strong linkages between inside and out. The guest quarters can also be shut down from the remainder of the dwelling in order to conserve energy when only the residents are in occupation.

Formally the building is a direct extrapolation of the plan and is subsequently orthogonal in its geometry. A height hierarchy is established between the volumes internally identifying the living areas from the private quarters. A high ceiling with a sweeping curve abolishes any hard junction with the wall in the main living space drenching it in daylight and signifying it as the primary volume within the dwelling. A deep concrete shelf adjacent frames the courtyard, provides weather protection for the oversize sliders and blocks summer sun whilst allowing it to penetrate deep into the living space in winter. Elsewhere, deep window and door openings are carved out of the solid form framing views throughout the house and capturing vistas of the garden beyond.

Whilst the form follows an orthogonal plan, a subtle curved concrete awning signifies the entry to the dwelling and introduces a softness to the entrance. Beyond, spaces are connected by a central ‘circulation spine’ running directly east/west through the house with the front and rear entry doors directly opposing one another. Two sliding doors located at either end of the main living space allow this spine to be dissected. This reorients the east/west circulation north/south and facilitates a thoroughfare between the main living space and the primary north facing courtyard.

Garaging is deliberately provided separate to the house, providing a buffer from the westerly sun, cold winter winds and a busy road.

- Solar control – Main living areas are oriented to the north. All north-facing windows and doors have extended eaves to block the summer sun while allowing deep interior penetration of the winter sun which tracks much lower in the sky.

- Natural ventilation – All rooms are cross ventilated with windows on opposing or adjacent walls. The main living spaces and principle sleeping spaces are oriented north permitting prevailing summer north easterly winds to passively cool, while the southern elevation is shut down from the prevailing winter south westerly winds.

- Thermal mass – Concrete slabs and brick walls are used throughout, helping to passively heat and cool the home throughout the year.

More than just functional devices to ensure the dwelling performs well, these principles further reinforce a connection to the various micro-climates that exist across even a small suburban site such as this. “regarding the dwelling as a series of locations, as architects we can provide opportunities for our clients to experience the site in different ways, in different spaces and at different times of the day. Says Ben.

Careful composition of materials codifies the dwelling from base to apex. Each material having a tactile quality relevant to its location and purpose. “Honesty in material expression is something we emphasise in all our work. We never rely on applied finishes to tell the story and we carefully select materials that will stand up to punishment’ says Simon. 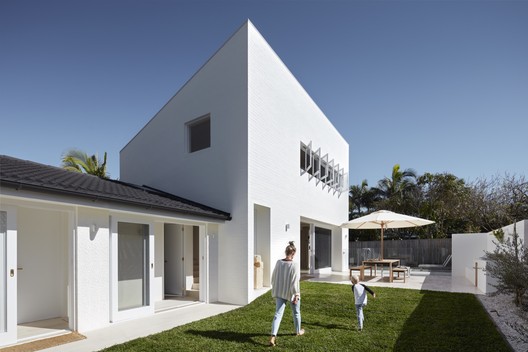