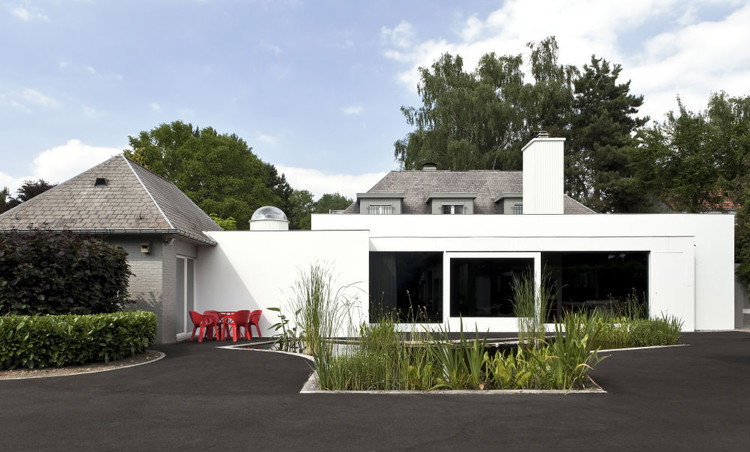 Text description provided by the architects. We just received the following project from Label Architecture. It´s a house named "Dynasty", and it is located near the city of Brussels, Belgium.

Further information and pictures after the break.

The Dynasty extension is situated in Hélécine, a town between Brussels and Liège in Belgium. The primary building was built in the sixties, during those euphoric years when people weren't led to reinvest rural buildings by taste for the rural, but were more inclined to build new housing in a solid way.

According to the owners' memories: "farmers used to live in farms, while families were living in houses". At the starting point, many changes had already been made, as the existing garage had been modified into a bigger one in order to become an isolated studio and an overheated veranda was added to the backyard.

This extension project appears at first sight as two large flat volumes fitting together. The living room occupies the entire width of the existing house at the same level and opens itself generously on an asphalt surface. A peaceful sense of calm emanates from the fact that no pillars disturb the twelve meters long window. The same window continues and folds itself in the corners in order to visually expand the rooms. Only the sliding frame with dark and reflective glasses stands out such as a white polaroïd frame which is waiting to dry.

While that window may also appear as a pair of sunglasses with tinted lenses, the goal is especially -when one is inside- to gain a maximum of relationship with the exterior by lowering the impact of the southwest exposure. The implantation of a water area nearby in which it is even possible to bathe, also helps to cool the atmosphere. Further inside, one can observe that the "plan libre" model turns into a more bastard and ambivalent Belgian composition.

Besides the few first signs of a universe “à la Tati” (the oversized fireplace, the swimming pool in the shape of the Berlaymont with three arms, the uplifted skylight-capsule of the bathroom, the interior and exterior lightings scattered along constellations plans), it is rather an architecture whose interior is more a succession of rooms with their own proportions than a large single space as we might think from the façades.

The economy of the project and the program led to build on the previous existing foundations and to take advantage from the small garage in order to set in the master bedroom. Intermediate spaces such as the dressing or the core adjacent to the patio slip under the existing roofs and produce differentiated configurations.

The height of the floors and ceilings are organized into a hierarchy according to the role of each rooms. Outside, a long concrete table poured in situ makes it possible to bring together a dozen people for special occasions. The asphalt material, commonly negatively associated with the logic of the car, criticized by urban-rural citizens and yet used so much by them, becomes here an ennobled floor coating in contrast with the white color of the extension.

A black sheet, starting from the existing parking, is stretched out up to the building to reach landscape qualities. A strange form of empathy with the Belgian environment with its various gradations of authenticity. In this case of extension in Wallifornia, the inexhaustible source of inspiration of the

"Little House on the Prairie" has happily shifted to the "Dynasty" saga. 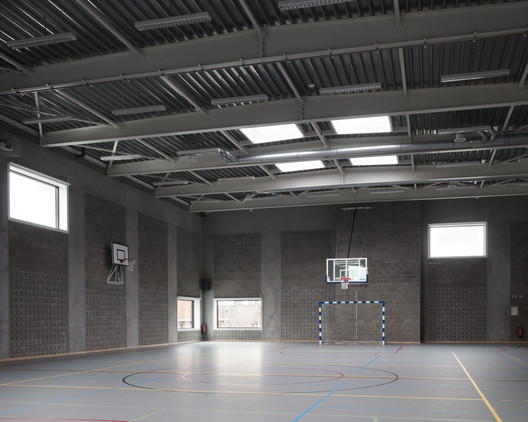