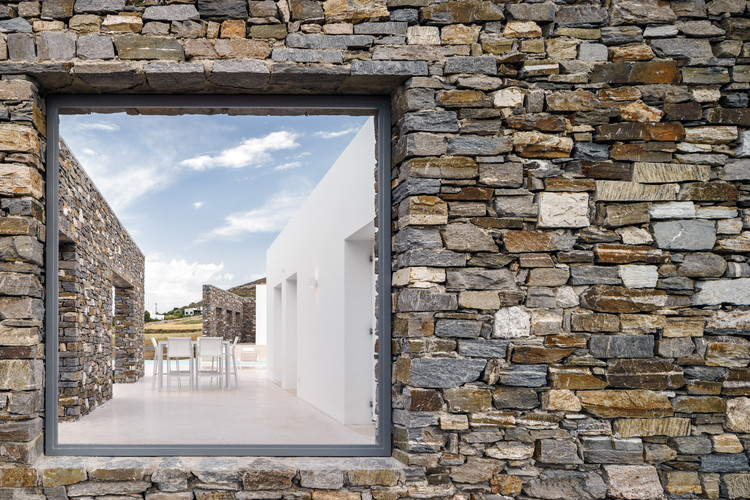 ‘A hug is a form of physical intimacy, universal in human communities, in which two or more people put their arms around the neck, back, or waist of one another and hold each other closely’.

The work is situated at the Aghios Ioannis Detis location on the island of Paros. It has an eastwards orientation, with a view towards the sea and the Naoussa bay. The area is under a special protection order, and adjacent to it the Environmental Park of Aghios Ioannis Detis has been created.

The complex consists of two buildings with a shared open-air space and a swimming-pool. The large mass of a single building is broken down into two and is harmoniously adapted to the terrain. The masses are laid out facing the view, and the central courtyard has been created between them, adapted to the slope of the terrain and protected from the north  winds.

The entrance is on the western side of the site, at its highest point, and has been inserted between the masonry buttressing walls. The buildings, of a small mass, are adapted as much as possible to the incline and topography of the terrain. A basic aim has been the least burdening with a building mass of the protected area. The courtyard at the rear, protected from the strong winds, organises the functions by creating a nucleus with direct reference to the building masses. Such forms are encountered in monasteries, which have the cells on the perimeter and the church in the centre. Similar arrangements are also to be found in traditional complexes of ‘katoikiés’.

The stone walls encircle and ‘hug’ the building, protecting it from prying eyes. Ιn some places, the walls become a building, and in others, courtyards are created, adapted to the ground and to the environment. The plastered white walls of the buildings are visible only from the inner courtyard, and fragments of the elevations can be seen by the passer-by. The elevations consist of walls around the central courtyard; in this way plasticity of form is achieved, integrated into a unitary approach to architecture. The design of the apertures is combined with the architectural character of the building. The feature of the repetition and standardisation predominates. The apertures in the perimeter wall are as few as possible. Great emphasis is placed on the ‘fifth elevation’, the roofs, as there are views from the hills round about.

By employing the features of Cycladic architecture, we have de- signed an ensemble of buildings and a landscaping of the terrain adapted to the waterless Cycladic conditions, with a view to leaving the smallest possible footprint on the environment. . The transformation of the morphological features of Cycladic architecture with   a view to creating a contemporary architectural language is, together with its integration into the natural landscape, the guiding principle of the design.

The totality of the intervention realised is in dialogue with the land- scape and creates a space for habitation. Βy breaking down the boundaries between the roofed and open-air space, it embraces human activity in creating a familiarity with the space and the locality. 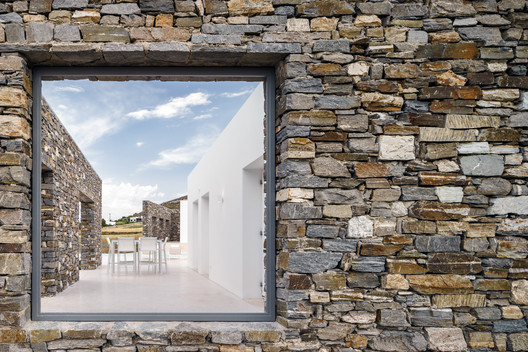