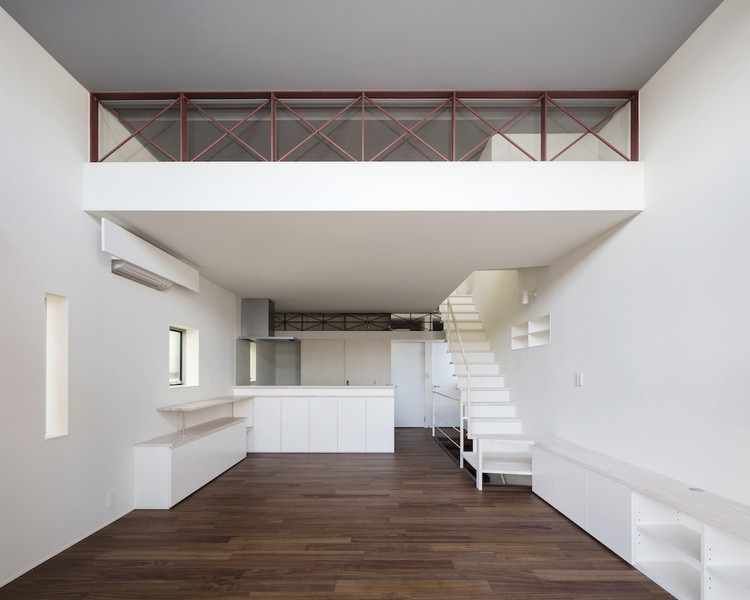 Text description provided by the architects. Located on a lot with a narrow frontage, this building houses a gallery on the first floor and a residence on the second and third floors. The client requested that the gallery have a glass facade to allow good visibility from the street and be a single open space to ensure flexibility and allow for future changes in use. They also requested a separate entrance to the second-floor residential area, and a design that required no structural walls on the first floor, such as a Rahmen structure.

In typical Japanese wood-frame architecture, load-bearing walls are necessary between the beams, with a particularly large number needed on lower floors. This leads to a partitioning of space. Using a wooden portal-style Rahmen frame toward the front of the building rendered load-bearing walls unnecessary, but the columns also had to be widened, crowding the narrow facade. To allow for narrower columns, the top-to-bottom height of the beams had to be increased, but ordinarily that would close off the space. Our design solution was to create a Rahmen frame using composite beams made of steel trusses and laminated lumber, which allowed for both narrower columns and long lines of site, ultimately creating a greater feeling of openness in the space.

By inserting open steel-truss frames in the center of the expanded beams, we were able to avoid obstructing the space with thick beams, instead allowing lines of site to easily pass through them. Based on strength requirements and the intended use of each area, we varied the form of the truss frames in multiple ways and altered the height of the ceiling, creating a freer, more open space.

Because the steel trusses support only the horizontal load, a fire-resistant covering was not necessary, and it thus became possible to incorporate the truss frames into the design. The steel-wood hybrid structure lightened the building and also lowered costs compared to an all-steel frame. We used many styles for the steel trusses and put them to use as balcony handrails, sun shades, back support for a bench, and openwork elements above doors. The frames are also visible as-is in many parts of the building, defining both the interior space and exterior appearance.