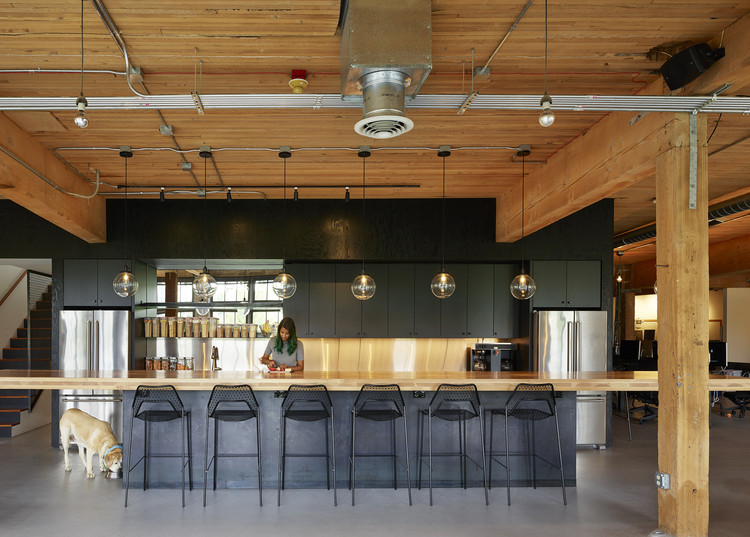 Text description provided by the architects. Substantial's new open work space maximizes the existing character of the building
SEATTLE--Seattle-based goCstudio, an architecture studio known for its innovative work and collaborations with artists and craftsmen, has completed the new office expansion for Substantial which occupies the upper floor of a historic building in the heart of Seattle’s Capitol Hill neighborhood.

Substantial is a digital product studio that was founded in 2006 and moved into the 100-year-old building in 2013. goCstudio was brought on board to redesign the entire 14,000-square-foot upper floor of the building to create an open plan office that would accommodate the growing needs of the company.

The upper floor at the corner of Pine and Broadway was the home of two office spaces of very different character. Substantial inhabited the smaller of the two and readily took the opportunity to expand into the rest of the floor when the previous tenant moved. The challenge was to create a cohesive open plan work space which retained the feel of the original Substantial space and would maximize the existing character of the building; exposed brick walls, old growth Douglas Fir beams and roof decking, and warehouse style window walls.

A strong programmatic concept was required to transform the space. Working closely with the owners to understand how the office operates on a day to day basis, as well as the needs of the ever growing number of events and social programs that Substantial hosts, goCstudio proposed the concept of ‘The Forum.’ The idea of The Forum as a place of assembly for both social and business activities drove the design of the expansion. By creating a focal point for a large office, employees and visitors alike would have a place to congregate and exchange ideas in an informal space.

Architecturally, The Forum became an open space below a new large scale skylight adjacent to the entry staircase. Not only is the skylight used as means to allow natural light into the deep plan of the building, but it also naturally draws people into the heart of the building. This space became the programmatic organizer of the new insertions which were laid out around it. A strong material palette of ebony stained plywood defines the new insertions which are organized around The Forum and tie the open plan office together. Two existing conference rooms were retained from the previous tenant in the expansion and treated with the same material palette to tie them into the new design. New dedicated spaces were required for conference rooms, quiet rooms, and phone rooms. It was these spaces which were organized around the central forum. The rooms all have large steel and glass doors in the style of the industrial warehouses of the same era as the original building. These openings to the forum allow enclosed spaces to engage with common space, especially when not in use.

For the first time in many years, views are opened up through the building, from east to west. Natural light is able to pour into the space from three sides and from above through the skylight. The new architectural insertions allow a clear understanding of the space and circulation while allowing employees flexibility in the way they work and interact with each other.

A large aspect of Substantial’s working practice is the hosting of public and private events. Creating a large social space that could be multifunctional was an important factor in the design of the expansion. By day the large kitchen/dining area is used as transient work spaces for the employees who often enjoy a change of scene throughout the day. These 25-foot kitchen island and 16-foot bar island allow for an easy transformation into a busy full service event space. These were created with large CLT (cross laminated timbers) planks that were craned into the space from the alley by temporarily removing one window unit. Similarly on the north side of the office, work cubbies were created for flexible work space, providing a variety of areas for small teams or individuals. Music and creative expression have always been a thread that ties together the owners of Substantial and an important aspect within the office. The floating DJ booth that lived in the original office space was retained as a focal point on the east side of the space to be used during events.

A 20-foot-long custom reception desk which reuses Substantial’s former steel entry door, was designed to greet visitors as they ascend the staircase from the street. Dedicated project rooms for team work are stacked to the north of the space, separated with simple white walls which sit in high contrast to the original exposed concrete north wall. Almost half of the office can be used as social gathering space with ease. The existing hardwood roof decking, exposed beams and brick are highlighted through the simple and clear palette of materials that are applied to the new spaces in the center of the plan. A large new skylight effectively drops natural light into the deep plan and provides a focal point for interaction between employees, clients and visitors alike. 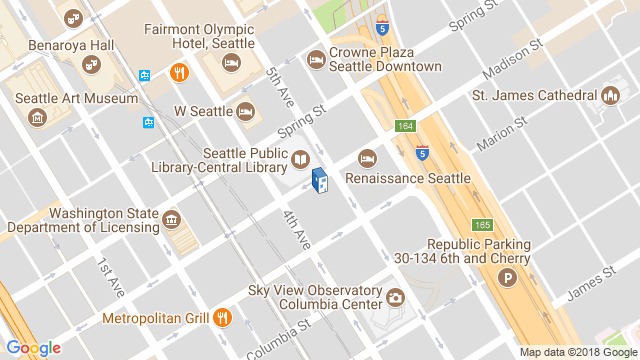 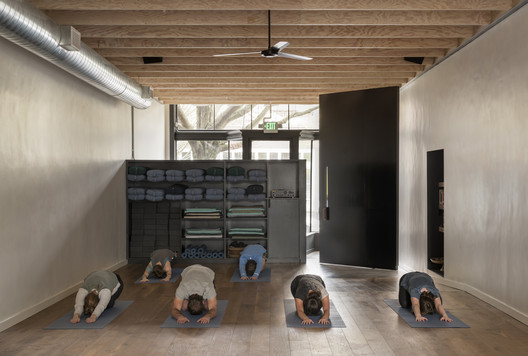