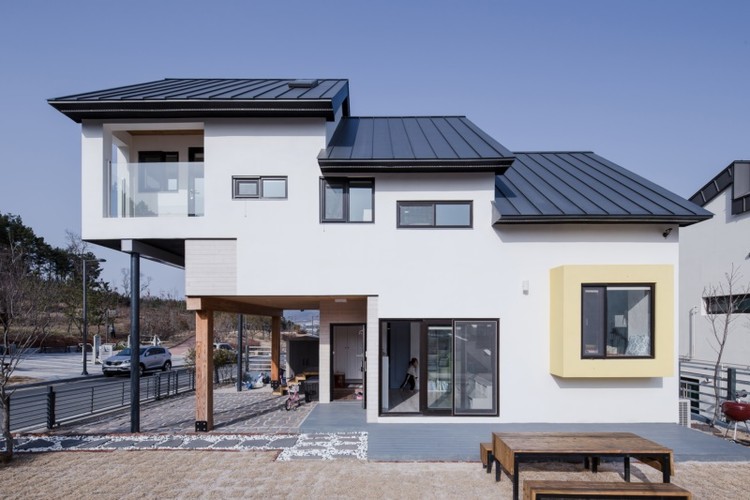 Text description provided by the architects. The Slow House located in the Innovation city in Ulsan is situated in the rectangular site with 8 meters-width road at the northwest side facing the foot of Mt. Hwangbang. Since it is expected that there will be a lot of car traffics and mountain climbers, it is necessary to design a plan which protects user privacy. Therefore, the design was started with the intention of separating a private area with a public area. First, the shape of the mass was decided as a form wrapping the space and embracing the mountain. And, the lower part of the piloti resulting from the form of the mass is used as a buffer zone where the private area and the public area are separated.

The inner space of this house is roughly separated into three hierarchies: a family area, children area, and couple area. In order to clarify these hierarchies, the concept of the staircase was used.

The family area located at the lowest part of the house includes a kitchen, dining room, and others for the purpose of the family activity. In order to embrace various programs in small size area, a skip floor plan that is dislocated every half story was planned instead of a traditional method that separates spaces using walls and furnitures. Through the skip floor plan a large volume space compared to the size of the area could be obtained. And, the Growing Light was installed to fill the emptiness, giving the sense of the center to the space. Once approaching to the second floor via the staircase, a study room, the first buffer area, is seen. Through this study room a space where it is possible to look down the living room and communicate each other was made. Also, it was planned that the children can pass through the family area by arranging the bedroom where such a formation can be seen.

Each room has a small size, but, has a different shape of a ceiling to form a unique feeling of space. Again, the staircase leads you half story up to the second buffer area. The low corridor divide the space for parents and children, and it is also used as an approaching area for a bathroom.

This area for the husband and wife is separated very far from other spaces at the highest location, but it is possible to control the children and family area anytime. And, an attic is located at the end of the staircase. Somehow large-sized attic can be used as a separated space for children and guests. The space for children in the attic has a small window toward the living room, enabling to communicate.

The moving path in the Slow House was planned to go up following by the staircase and the corridor. However, each room is open toward the space for the family, making the house to have a feeling of large space. 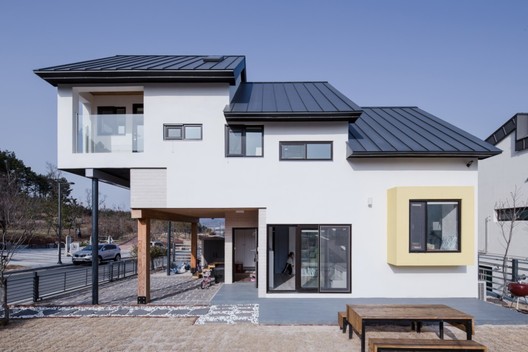